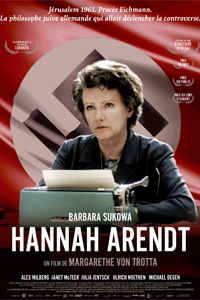 My only real problem with “Hannah Arendt” is that it’s not a mini-series. Arendt was a writer of long books and a maker of complex arguments, so the two hours of Margarethe von Trotta’s ardent and intelligent film about her are bound to feel somewhat superficial. And the movie, even as it answers a hunger for engagement with the life of an extraordinary mind, may also awaken an appetite for more. Arendt’s work, a heady amalgam of philosophy, history, journalism and political theory, does not easily align with the academic fashions of the moment.http://movies.nytimes.com/movie/470438/Hannah-Arendt/trailers

We may need her example more than ever. It’s probably too much to hope that Ms. von Trotta and her star, Barbara Sukowa, will do for Arendt what Nora Ephron and Meryl Streep did for Julia Child, but surely a fellow can dream. And in a manner not altogether dissimilar to the way “Julie & Julia” mastered the art of French cooking, “Hannah Arendt” conveys the glamour, charisma and difficulty of a certain kind of German thought. Ms. Sukowa, compact and energetic and not overly concerned with impersonation, captures Arendt’s fearsome cerebral power, as well as her warmth and, above all, the essential, unappeasable curiosity that drove her.

Contemplating one of the great lives of the 20th century — Arendt was born in Germany in 1906 and died in New York in 1975, and she was an eyewitness to many of the central follies and catastrophes of the age — Ms. von Trotta concentrates on two exemplary and controversial episodes. The first is Arendt’s coverage of the trial of Adolf Eichmannand the furor that followed the publication of her reporting, first as a series of articles in The New Yorker and then as the book “Eichmann in Jerusalem.” The second, presented in slightly awkward flashbacks, is Arendt’s relationship with the German philosopher Martin Heidegger, her teacher and lover, who publicly joined the Nazi Party in 1933 and never publicly repented after the war.

Heidegger, played by Klaus Pohl, and Eichmann, represented in real clips from his 1961 trial, are contrasting embodiments of the “dark time,” as Arendt calls it, that shadows every aspect of her life. Though she and her husband, Heinrich Blücher (Axel Milberg), live in relative ease in 1960s Manhattan — their work teaching and writing blending seamlessly with a leisure of contentious cocktail parties and discreet adultery on his part — the trauma of the Holocaust is never far away. In Eichmann’s trial, following his seizure by Israeli operatives in Argentina, Arendt, an assimilated German Jew and a Zionist in her youth, sees an opportunity to stare in the face the horrors she had explored in “The Origins of Totalitarianism.”

The face she saw, famously, was a mask of bureaucratic blandness, summed up by her phrase “the banality of evil.” Her description of Eichmann as a thoughtless, bloodless functionary rather than a monster led to accusations that she was defending him, just as her discussion of the role of Jewish leaders in the destruction of their communities provoked charges of victim blaming. The reaction to “Eichmann in Jerusalem” was harsh and relentless, and Ms. von Trotta shows how it extended from the public realm of learned journalism into Arendt’s personal life, costing her several longstanding friendships.

Her staunchest ally was Mary McCarthy, played with winning verve and appropriate venom by Janet McTeer. In addition to writing “The Hue and Cry,” an essay published in Partisan Review skewering Arendt’s critics, McCarthy rallies Arendt’s morale and coaches her in the martial arts of defense and counterattack. Their friendship (immortalized in a splendid volume of letters that has clearly served as one of Ms. von Trotta’s sources) is a fascinating study in cultural and temperamental contrast, an impulsive and witty American paired with a steady, phlegmatic German.

Not that “Hannah Arendt,” though ultimately a celebration of seriousness, is grim or plodding. On the contrary, the movie turns ideas into the best kind of entertainment. There is an undeniable nostalgic thrill in stepping into an era in New York when philosophers lived in apartments with Hudson River views, and smoking was permitted even in college lecture halls, especially if you are someone for whom the summit of early-’60s Manhattan magic is not Madison Avenue or Macdougal Street but Riverside Drive. But it would be a mistake to file this film with all the other rose-colored midcentury costume dramas.

From her earliest involvement with the politically determined, formally radical New German Film of the 1970s, Ms. von Trotta has been interested in history as an active current in the present. This is perhaps most vivid in “Rosa Luxemburg” (1986), in which Ms. Sukowa played that early-20th-century writer and militant as a thoroughly modern spirit, passionate and skeptical.

Arendt is a more challenging cinematic portrait. Her outwardly bookish existence challenges the ancient distinction between active and contemplative ways of living, but the work of thinking is notoriously difficult to show. In this case, it looks a lot like smoking, with intervals of typing, pacing or staring at the ceiling from a daybed in the study.

Still, I would not hesitate to describe “Hannah Arendt” as an action movie, though of a more than usually dialectical type. Its climax, in which Arendt defends herself against critics, matches some of the great courtroom scenes in cinema and provides a stirring reminder that the labor of figuring out the world is necessary, difficult and sometimes genuinely heroic.