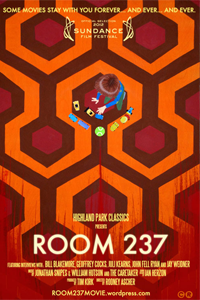 I think we can all agree that the famous "Here's Johnny" moment in "The Shining" refers to talk-show host Johnny Carson's nightly introduction. But based on the evidence in "Room 237," that may be the only thing we can agree about when it comes to Stanley Kubrick's classic horror film.

Director Rodney Ascher gives a handful of the movie's fans free rein to weigh in with in-depth theories of "The Shining." They include the standard interpretation that it's an indictment of the treatment of American Indians, the nuttier one that it accuses NASA of faking the Apollo moon landing, the almost insupportable one that it has something to do with the Holocaust and the inevitable claim that it's only possible to find out what the movie is about if you -- yup --- play it backwards.

You don't need to believe any of the theories to be entertained by how thoroughly "237" dives into the minutiae. It points out for us a box of Calumet baking soda that is the basis of one argument in favor of the American Indian interpretation, and it shows a skiing poster in the background of a scene that lays the foundation for an especially wayward hypothesis.

We never see the people who are spouting these theories, which makes them come off even nuttier (they're like voices in our heads), and Ascher frequently offers clips from "The Shining" that directly contradict what the voices are telling us.

It's a playful film, jam-packed with illustrative clips from "The Shining" and other movies. Watching it makes you feel like you're attending a really entertaining film class where your classmates confidently let their freak flags fly. Disagreeing with your "classmates" is part of the fun here, as is the reminder that sometimes a movie can affect you so much that you wish you could move into and learn everything there is