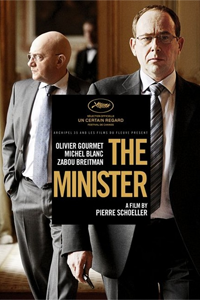 How can you ever hope to resist the allure of a film whose poster features a naked lady and a giant crocodile? Well, you can’t, as that combination is scientifically proven to be more attractive even than a monkey with a drumkit. So, I took my place in the company of the director and cast, and some other recognisable faces (including the Dardennes) to watch the humor-pricked political drama The Minister from Versailles director Pierre Schoeller, not entirely sure where the nudity and crocodiles would fit in.

The film, framed by two tragedies, offers a microcosmic portrait of the inner workings of government, focusing on Transport Minister Bertrand Saint-Jean (Olivier Gourmet) as he tries to deal with multiple emergencies – a fatal bus crash in the Ardennes, a fragile economic climate, and some underhand machinations from other politicians – while simultaneously holding on to his own identity and personal life. Rather than a three-act narrative, we instead follow Saint-Jean as he works himself through the inner mechanisms of government, fending off political enemies and trying to hold his own in a world that encourages blind allegiance over moral fiber.

I admit, it’s not one I would usually go for based on that synopsis, but when in Cannes…

The first thing I noticed, and it is surely intentional, is the relative similarity between The Minister and UK comedy series The Thick Of It (or if you prefer, the movie version In The Loop): there is a similar spirit of defiant humor, and also the same refusal to go for direct, politicized parody, and there are unavoidable comparisons to be drawn between both sets of characters. Both take the fairly gentle approach of commentary on the problems of government through portraits of involved individuals, rather than presenting the whole system as rotten to the core, which would have been a far easier, far more provocative, but less successful creative choice.

Both projects also focus on the more invisible mechanisms of a political system, with The Minister looking at a figure (The Minister for Transport) who is slightly removed from the front line of politics, which facilitates a more human capacity to the story than would have been possible had the character been either a leading player in government or an obvious imitation of a figure from real life.

While The Minister is not quite as overt a comedy as The Thick of It, and Saint-Jean never quite strays into the humorously abrasive territory of Peter Capaldi’s Malcolm Tucker, there were a number of notable laughs to be had, and I did get the feeling that other sequences would have had more comedic impact for French viewers who are more familiar with the context, so it wasn’t that some of the comedy was less successful, it was merely a matter of national tastes and experience.

Like The Sopranos, the film plays like the explicit internal conflict of a man in a powerful position wrestling with the paradox of his public image and duties, and his private life and identity. Occasionally the public mask slips, and we get a sense of the man, and indeed a good deal of the film’s most successful comic moments come when Saint-Jean is depicted as no more than human, and just as prone as everyone else to playing the unintentional fool. The role is solidly brought to screen by Belgian actor Gourmet, whose performance is enough to add some dramatic pull to a film that would otherwise fail to make too much of an impact without him.

Although Saint-Jean is an ostensibly human character, there is a certain element of demonization here, as we see some of the traditional stereotypes of political farce/parody, with grotesques like the misogynist, porcine MP with a wandering eye, and characters who will variously kill or kiss their fellows based on what it could do for their own agendas, but there are as many ”good” characters as there are “bad” and the point is more to judge individuals and not the system so much. The film is careful not to sanctify all “normal” people though, depicting a group of protesters that Saint-Jean encounters as too quick to animalistic behavior when they threaten to kidnap the Minister to aid their cause, despite his promise that he will plead their case to the rest of the government. In doing so, Schoeller circumnavigates the potential to undermine the film’s overall message with such a sweeping evaluation and sticks with a far more appropriate subtlety to pass and encourage comment. There is no trite conclusion that the Minister has entirely seen the error of his ways, having had his head turned by a promise of power, nor that he will definitely tread the path of some of his fellow politicians (the stereotyped misogynist, the self-promotionalists, or the power-hungry). So we are left pondering the question of whether Saint-Jean is a redeemed character after his flirtation with the devil of blind ambition, or if he is simply a redeemable one.

The film is certainly successful to an extent, and that success is best quantified by the fact that it is an almost two hour film about the French Transport Minister that still managed to hold my attention for the entire runtime. The in-point is that the film is offering an insight into the potential for all people to be morally corrupt, given the right circumstances, and as such it is a universal story without ever being a detrimentally generalizing one. The most important story is Saint-Jean’s personal one, and the political background acts chiefly as a framework for his resolve and strength of character to be tested.

But there are some obvious problems: there are too many minute sub-plots to follow properly, which are obviously there to convey the complexity of Saint-Jean’s role, but which end up getting so confusing that it is hard to discern what the resolution was and what impact it may have on the character. The narrative pacing doesn’t help this effect either, as it skips through episodes at near break-neck speed, and certain characters who we are clearly supposed to recognize as important end up drifting away out of focus too quickly. I also didn’t enjoy the soundtrack at all, which felt more of a distraction than a component part, since the tracks seemed in places to have no relevance to their accompanying scenes, but it was just about forgivable in light of how good Olivier Gourmet is as Bertrand Saint-Jean.

The strongest point is that human relationships are given priority, so everything remains relatable even when the film threatens to get bogged down in superfluous detail of political deals, and in combining that approach with a very charismatic, almost anti-hero like protagonist and some flashes of technical brilliance (particularly the car crash scene) the film does draw out some engagement.