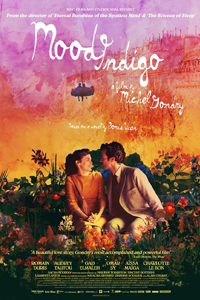 Just the first 10 minutes of Michel Gondry’s latest pillowcase of whimsy, “Mood Indigo,” has more invention than most of the movies you’ll see this year. Right off the bat, we get a man costumed as a mouse, a factorylike auditorium where workers type merrily on moving typewriters, an eel emerging from a faucet, a doorbell that crawls down a wall like a water bug, a “pianocktail” (a cocktail-making piano, specializing in Duke Ellington), a table on roller skates . . . in other words, if you’re seeking realistic, straightforward drama, this isn’t your movie. But if you’re looking to get happily lost in a whirlwind of imagination, step right up — and oh my.

At the heart of all this invention is, well, a heart, and a love story. In a goofily fantastical Paris — where food dances on plates, shoes run down stairs by themselves, and human hearts are made from red velvet — Colin (Romain Duris) and Chloe (Audrey Tautou, looking like only a faintly older version of Amélie) meet at a party. They dance the biglemoi (a dance in which one’s legs grow magically longer), soar through the air in a little cloud car as if visiting a dreamlike amusement park, and fall in love. But the sweetly smiling Chloe has a strange, poetic ailment, which I’ll let the movie reveal to you, and “Mood Indigo” becomes less happy limerick than dark sonnet. On and on the story goes, with those typewriters banging away, and you marvel at how no one makes movies quite like Gondry (“Eternal Sunshine of the Spotless Mind,” “Human Nature”) — and at how a dash of curlicued surrealism somehow makes the real world, in all its staidness, a happier place. — Moira Macdonald, The Seattle Times