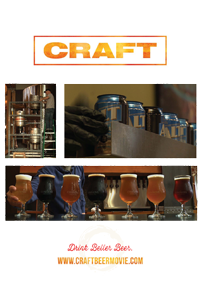 Preceded by The Art and Science of Beer (USA, 2014, English, Color, 5:41 minutes). Dr. Charles Bamforth, the head of Malting and Brewing Science at UC-Davis, explains beer-making and reveals how to pick the freshest pint when you’re at a pub. Presented by University of California, this film is a featured episode from Onward California, a documentary series about University of California faculty and the impact of their work on the public.

In CRAFT, filmmaker Craig Noble takes a beertastic voyage to the front lines of the craft beer revolution. He travels across the United States and Canada to interview prominent craft brewers to find out how they maintain quality, creativity, and integrity in the face of a voracious demand for craft beer.

To learn more about craft brewing, he undertook an apprenticeship on a farm brewery, attended beer school in Vermont, and earned his Cicerone (beer sommelier) certification. In the documentary, the sum of his experiences culminate in his formulation of a professional-quality farmhouse ale recipe. (Post Brewing and BRU Handbuilt Ales are collaborating to brew their version of his beer for our festival.)

A panel discussion that will include Bryan Selders, Dan Rabin, award-winning beer and travel journalist and author of Colorado Breweries Guidebook, and John Lehndorff, food writer and host of the Nibbles food-oriented radio program on KGNU, will follow the screening.