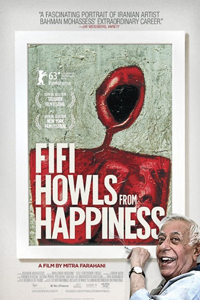 Bahman Mohassess (1931-2010) had the misfortune of being born gay in a country hostile to homosexuality. Nevertheless, the flamboyant iconoclast managed to carve out an impressive career as an artist in pre-revolutionary Iran, enjoying celebrity status as the “Persian Picasso.”

He earned that recognition despite creating scandalous works such as anatomically-correct sculptures of men which had some censors breaking off their penises. Unfortunately, Bahman’s world came crashing down around him when Ayatollah Khomeini toppled the Shah in 1979.

For, the new regime was an Islamic caliphate which stepped up the oppression of homosexuals by passing strict religious laws making sodomy a capital crime. So, Bahman wisely hightailed it to Rome where he would live out his days in relative obscurity.

Over the ensuing years, Iran was criticized by human rights activists for doling out the death penalty to thousands of gays, prompting its President Mahmoud Ahmadinejad to assert in 2007 that “We don’t have any homosexuals.” Regardless, Bahman Mohassess continued to be an important historical figure, even in exile, and his controversial contributions have been preserved for posterity in Fifi Howls from Happiness.

Directed by Mitra Farahani, the enlightening documentary features an extended interview conducted with her cantankerous, camera-shy, chain-smoking subject shortly before his demise. And the film augments Bahman’s reflections with file footage of his art shows and installations, along with commentary by surviving friends and admirers.

A poignant tribute proving Iran has definitely had at least one homosexual, in fact, a national icon-turned-persecuted persona non grata who had the good sense to escape before being exterminated for his sexual preference.