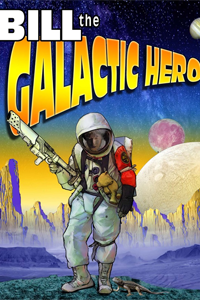 C.U. Boulder Film Students can see the 9:30 show for FREE, but still need to get a hard ticket from the ATLAS 326 office while supplies last.

Further details: The World Premiere of BILL, THE GALACTIC HERO at 7:30pm will be followed by a short Q&A with director Alex Cox and assorted cast-and-crew. The bonus 9:30pm will only have an introduction by aforementioned guests (no Q&A).

To purchase advance tickets to the 9:30pm show of BILL, THE GALACTIC HERO, please send an email to Kaitlyn [dot] Lawlor [at] colorado [dot] edu. Specify how many tickets you would like, whether you are CU Boulder student or if it's General Admission, and we will hold them at the door. Requests will be taken in the order they are received up until 3pm this Friday.

Author Harry Harrison was a prolific American science-fiction author who is known for many creations, including Make Room! Make Room! - a book released in 1966 that was later adapted for the screen as Soylent Green, starring Charlton Heston. Just one year before releasing Make Room! Make Room!, Harrison wrote Bill, the Galactic Hero as an anti-war riposte to Robert A. Heinlein's pro-military Starship Troopers (1959) - which later got a cinematic send-up by Paul Verhoeven. Now comes director Alex Cox, who is no stranger to science fiction. His first big release, Repo Man, although mostly grounded on the streets of L.A., did include aliens and time machines. A decade later, in the mid-90s, he came close to teaming up with the people behind Wallace and Grommit to make what would have been the biggest project of his career; a faithful film adaptation of H.G. Wells' War of the Worlds. It would have used the stop-motion talents of Aardman Animations to wreck havoc and mayhem on London but, alas, that project was torpedoed due to an egregious extension of copyright law.

Alex read Bill, the Galactic Hero in the 1960s and met with Harrison to option the book around the same time he was working on Repo Man. It was repeatedly pitched to the studios, but they never showed any interest because it was "too expensive and too anti-war," recalls Alex. When Alex started teaching at C.U., he re-imagined the project as a student-film and pitched it as such to Harrison and his agent. They agreed. Harrison was also able to read and approve of the script before he passed away in August of 2012.

Alex then successfully met his $100,000 goal on Kickstarter and spent the Spring on production, using the following Fall semester for post-production. As an added bonus, Iggy Pop read the Harrison book, watched a rough cut of the film, and contributed an original song. The film will have its World Premiere at the International Film Series in Boulder, Colorado, on Friday, December 12th, 2014, with cast-and-crew present for the 7:30pm show, and a bonus 9:30pm show.
The outline of Harrison's book shows our protagonist being recruited by the military in the centuries-old war against intelligent reptiles and enduring a variety of hardships that include losing a left arm. Along the way, the idiocies of bureaucracy and propaganda get exposed, along with a long list of other ills that are still all too familiar.  Bill also includes various exotic planet locations, space battles, robots, aliens, and a wide array of utterly fantastical elements. How would an all student-crew on a shoe-string budget pull this all together? The answer lies in a mixture of colorful animation (which bookends the action), playful black-and-white cinematography that uses different formats (both film and digital), and just about everything else one can find in a small tool-kit using lots of ingenuity.

(Full disclosure: as a Kickstarter contributor with a walk-on part, I'm not an unbiased source - and I've only seen the rough cut.)

Bill, the Galactic Hero has a scrappy energy that defies most Hollywood conventions. Alex Cox has an inner-anarchist, one that served him well when picking the soundtrack to Repo Man and later directing Sid & Nancy and Straight to Hell. And also on his excellent and criminally under-appreciated western Walker, although his unconventional use of anachronisms in that one got him in trouble with the studios, who expressed their outrage by burying the film and blacklisting him from future work. But, somehow, here he is, still at it, dreaming up impossible goals, breathing life into them, and then putting them up there on the big screen.

Bill, the Galactic Hero taps into the magic of Méliès going to the moon, adds the duct-tape can-do passion of the Kuchar brothers, and then makes a wholly unique and unusual contribution of its own that reminds me of the anything-goes ethos found in blistering garage rock that really doesn't give a fuck what the rock critics think. Only in this garage, the Maestro who worked alongside the likes of Joe Strummer and Elvis Costello, is giving everyone else in the band a chance to play lead guitar. He's passing the torch to the next generation and letting anyone who wants to step up to the plate take control. (I saw this first-hand, as my walk-on scene was not directed by Alex, but rather a film student by the name of Merritt Crocker). Alex's faith in his students is unshakeable. When I asked him what leading actor he'd like to work with if he had all the money in the world, he immediately answered with an enthusiastic "James Miller! He's the best!" ... and me, thinking of the celebrities he's already worked with (Harry Dean Stanton, Gary Oldman, Ed Harris, etc.), I momentarily forgot that James Miller is the theater student playing Bill. It also reminded me of how this really was a collaborative project between the Film Studies Program and the Department of Theatre and Dance. The results? From what I've seen so far, the are much like Iggy Pop's Bill, the Galactic Hero song (which includes jungle sounds and laser gun blasts) - raw, fresh, and surprising.