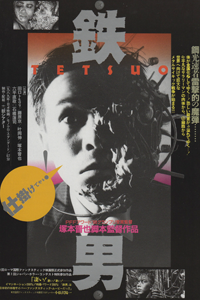 Trying to describe Tetsuo is like trying to describe the aftermath of a plane crash -- one that you've just been in. Twisted scraps of metal mix with broken limbs and ruined bodies: at first it seems as though there's no sense to this snarled, wiry chaos, until we look closer and see through the frantic jumble of steel and blood.

Tsukamoto's 67-minute black-and-white film combines the frenzied roller coaster pace of a Sam Raimi film with the acute symbolism of David Lynch's Eraserhead and ends up a ferociously original 16mm nightmare that stands in a league of its own.

In what is less a coherent plot than a series of disturbing images loosely strung together, Taguchi plays the “Salaryman,” an average Joe who accidentally runs over a maimed “Metal Fetishist” with his car. The next day, while shaving, the Salaryman notices a tiny shard of metal growing out of his cheek. As the film progresses, the metal within him begins to spread, eventually taking over his whole body, cell by cell, and transforming him into a nonhuman creature: 90% iron, 10% flesh. Meanwhile, the Fetishist seeks out the Salaryman, urging him to join his cause to “create an entirely metal world.”

This little plot synopsis of mine does Tsukamoto's film little justice, though. Because the film works on so many different levels -- it can be viewed simultaneously as a metaphor for the Japanese encroachment in the world market, a Cronenbergian AIDS analogy, or whatever else you care to read into it -- it never fails to live up to whatever you perceive it as.

Tsukamoto, who single-handedly wrote, directed, shot, lit, and edited the film, has made excellent use of his 16mm black-and-white format; every droplet of sweat on characters' agonized faces comes across as hyper-real in its depiction, and the film's breakneck pacing leaves the audience exhausted at its conclusion -- amazingly, it's almost too much to take.