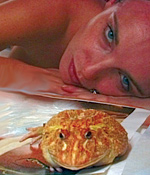 In this intense tale of passion and mortality, a beautiful but dying London art historian, obsessed with Hieronymus Bosch's Garden of Earthly Delights, spends her last months in Venice with her lover.