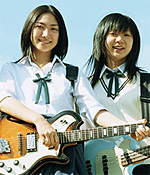 A straight-forward, deliberately understated movie about four girls who form a band for the talent show at their high school's annual Holly Festival. Instead of something glossy and loud, the film is almost aggressively demure, and in the end, it's nearly as memorable as its namesake. (M. Fischer, Cinematical)