Gospel According to Harry 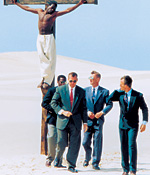 Starring Viggo Mortensen before he was celebrated, this maverick allegory takes place, according to Majewski, when the Pacific has dried up and California has become a desert. A couple try to make the best of it but life is hard; even sex hurts. The only person who enjoys himself is Harry, the tax collector.

Gospel According to Harry