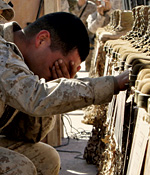 This searing documentary examines the devastation of the Iraq war on returning soldiers. The New York Times says “The Ground Truth stands out as an especially pointed indictment of the American military’s treatment of its own people on and off the battlefield.” Introduction and discussion with filmmaker Patricia Foulkrod. Co-sponsored by the Conference on World Affairs and International Film Series.

Co-promoted by Conference on World Affairs