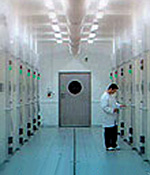 Nikolaus Geyrhalter observes the industrialized production of food, from cucumbers and tomatoes to olives, salt, and fish as well as beef, pork, and chicken. Except for casual snippets overheard during worker's poignant lunch breaks, there is no dialogue-just striking images: men crawling after a neon-lit vehicle on their knees to harvest salad at night; scientists analyzing bull sperm like science-fiction aliens conducting bizarre experiments; workers in hazmat suits spraying enormous hothouses growing bell peppers; chicken getting vacuumed off the floor by the hundreds; machines specifically designed to gut pigs. What Geyrhalter finds at the intersection of biology and mass consumption, again and again, is the conveyor belt: everything we eat sooner or later gets ripped from mother nature's bosom and shuffled mercilessly toward civilization's insatiable maw. Geyrhalter saves the killing floor for last, and it's impossible to watch the endless, efficient slaughter without thinking of the trains that ran (on time) to Auschwitz. An eerily beautiful and profoundly unsettling documentary that would make a diet-altering double-feature with Richard Linklater's Fast Food Nation. (J. Fauth, About.com)