A Fresh Tribute to The Beatles 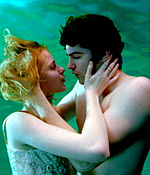 Jude’s a young Liverpudlian who yearns to cross the pond and find his estranged father, who’s working at Princeton University.

Stateside, Lucy’s a girl with kaleidoscope eyes and she wants to be taken away in a newspaper taxi. Her boyfriend’s been sent to fight in Vietnam; feeling lost and in need of new sensations, she follows her brother, Max, to New York City, where eye-opening sights and mind-bending people await.

As the stories of these three souls collide, they meet many characters with names plucked from Beatles songs. There’s Prudence, a lovelorn lesbian; Sadie, a sexy singer who seems to be channeling Janis Joplin; and Jo-Jo, a Jimi Hendrix-like guitarist.

As with Moulin Rouge!, the stars do their own singing — and they do it quite well. Evan Rachel Wood (Thirteen) is perfectly cast as Lucy. The same can be said of Jim Sturgess; he’s a relative newcomer to the big screen (he’ll co-star with Natalie Portman and Scarlett Johansson in The Other Boleyn Girl next year). Somewhat ironically, Sturgess’ singing voice is amazingly reminiscent of Ewan McGregor’s in Moulin Rouge!. These rising stars get a little help from some big time friends. Being for the Benefit of Mr. Kite is brought to life by Eddie Izzard, the multi-talented star of stage and screen. Salma Hayek, who starred in Taymor’s Frida, makes a cameo as a mucho, mucho sexy nurse during Happiness Is a Warm Gun. Music legend Joe Cocker offers up one of the movie’s best covers with Come Together; during the course of the song he appears as a beggar, a pimp, and a busker.

But the biggest cameo belongs to Bono. U2’s front man is Dr. Robert and, as the eponymous titled song goes, “he helps you to understand, he does everything he can… he’s a man you must believe.” A hippie transcendentalist, Dr. Robert’s got his own following and he’s on a cross-country book signing tour, with the ultimate destination being a visit with a like-minded quack named “Dr. Geary.”

Dr. Robert’s book is called I Am the Walrus. You get precisely one — and only one — guess as to which song Bono sings.

As can be expected from Taymor, who also directed the equally lush movie Titus and artfully brought Disney’s The Lion King to Broadway, Across the Universe is visually spectacular. Thanks to Taymor’s artistic acumen, Bruno Delbonnel’s cinematography, and Daniel Ezralow’s choreography, the movie’s an eye-pleaser even during its very worst moments.