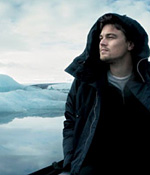 From the heartbeat thumps that accompany a tumult of images signifying climate catastrophe to the drumbeat clamor serenading the closing shots of a restless sky, The 11th Hour has no time for subtlety. Rather, this activist documentary — alternately impassioned, despairing, edifying, and hectoring about all the ways humans are screwing up the earth in a death rattle of hubris — shouts, People, do something! In contrast, An Inconvenient Truth feels positively hushed.

For star value, Leonardo DiCaprio narrates, and there are handsome shots of him contemplating a fragile ocean. But the real, unlikely stars of the film, written and directed by sisters Leila Conners Petersen and Nadia Conners, are the articulate experts, a raft of them riding a swelling tide of educational and environmental organizations. They wash in and out to explain just how dire our eco-predicament is. And they advise that although time is running out, there's still a chance for individuals who are not ExxonMobil fat cats to make a difference by, I think, eating local carrots and using those compact fluorescent bulbs that cast such harsh and insufficient light. (L. Schwarzbaum)