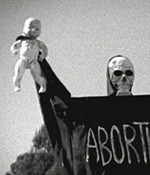 "Lake of Fire" does something with the volatile subject of abortion that neutral observers and even political partisans can appreciate: It offers a wide representation of perspectives and opinions. For the most part, producer/director/writer/cinematographer Tony Kaye (who also made "American History X") does his best to rattle every viewer's convictions yet ensure no one feels left out of the argument.

Perhaps nobody watching "Lake of Fire" (the title refers to the hell that many believe awaits all sinners) will change their opinion. But most will be engrossed by the movie's intentional unpredictability. There's no guessing what, or who, is coming next. Many antiabortion advocates will applaud Kaye's graphic close-ups of aborted fetuses, with their clearly human features, and the considerable screen time given to such diverse personalities as Randall Terry, founder of Operation Rescue, and Norma McCorvey, best known as the Jane Roe of the landmark 1973 Supreme Court ruling, who switched her allegiance to the antiabortion side. (The movie, 17 years in the making, was filmed in black-and-white, perhaps to soften the shock value of those fetuses, but it also establishes a rather astringent clarity to the film.)

And pro-choice viewers no doubt will enjoy those observers (including liberal cultural critic Noam Chomsky) who call attention to what they consider the hypocrisies of abortion foes, including the idea of advocating the sanctity of life yet supporting the "assassination" of doctors who perform abortions. They'll also approve of the movie's coverage of the trial, conviction and execution of Paul Hill, who shot and killed John Britton, a doctor who performed abortions. But all sides should be moved, in one way or another, by a 29-year-old woman named Stacey who undergoes an abortion with a mixture of moral conviction and emotional wavering. In her haunted face, the debate is writ affectingly large. (D. Thomson, Washington Post)