Shadows of Our Forgotten Ancestors 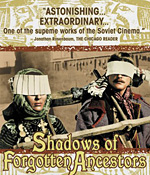 Shadows of Our Forgotten Ancestors was adapted from a novella by the Ukrainian modernist Mikhaylo Koysyubinskiy but, as shot (in a dialect that few Russians would understand) by future filmmaker Yuri Ilyenko, the movie pushes modernism toward madness… the movie that Shadows most closely resembles is Stan Brakhage's Dog Star Man—made at virtually the same time, half a world away in the Colorado Rockies. (J. Hoberman)

Shadows of Our Forgotten Ancestors