The most-talked-about documentary from SXSW 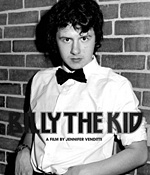 Easily the most-talked about documentary in this year's SXSW Film Fest, and with good reason, is Jennifer Venditti 's "Billy the Kid". To say the film is a haunting, intimate portrait of a teenage boy struggling through the regular hardships of adolescence would be selling the film short. Venditti's work is one of the strongest directorial visions, one made over the course of eight shooting days and months of precise, creative editing.