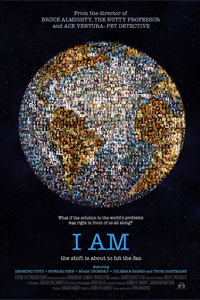 Tod Shadyac, the creative mind behind such films as Ace Ventura: Pet Detective, Liar Liar, The Nutty Professor, Patch Adams, Bruce Almighty, Evan Almighty premiers his first documentary this year. IFS is proud to offer a Colorado venue for I AM -- his deeply personal documentary feature film born from the wreckage of personal injury and self re-assessment.

As Karen James of "the Watch" writes:
"How often is it, exactly, that someone who has made it to the top of the Hollywood heap decides that the trimmings and trappings of his high-flying, platinum-plated life are all an illusion, and more or less turns his back on the money-making machine that made him in order to explore the very basis upon which our society functions? Indeed, that’s exactly what happened, when Shadyac essentially stepped away from the rat race following a devastating head injury from a mountain biking accident in 2007. Because of the cumulative effects of mild head injuries (of which the basketball player, surfer and mountain biker has had many) he ended up suffering a host of symptoms including mood swings, ringing ears and an inability to tolerate bright light and to concentrate, with a condition known as post-concussion syndrome. “The only time I felt OK was when it was dead quiet and dead black,” he said. Always a spiritual seeker, the injury coalesced something inside Shadyac, who, in questioning how it was that he could afford a 17,000 square foot home on a seven-acre estate in Southern California and private jet travel when much of the world lived in desperate poverty afflicted by disease, famine and war, had already traded in his Beverly Hills digs for a mobile home park in Malibu. The accident ended up being a blessing. Shadyac has said: “It knocked me out of my head and into my heart,” If I AM is any indication, this is most certainly true.