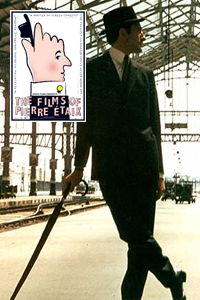 The delightfully playful, playfully imaginative “Grand Amour” was directed by Pierre Etaix, a filmmaker, illustrator, musician and clown whose major work and poetic melancholia has long been denied to filmgoers. Presented at the Cannes Film Festival in 1969, it popped up on the American repertory circuit but never received a theatrical run here. Legal woes kept it and his other key movies out of view for 20 years, but Mr. Etaix — who worked with Jacques Tati and drew the exquisite images of him on the posters for “Mon Oncle” — is back with a retrospective that opens on Friday at Film Forum in New York. These films will travel to other cities and be brought out on DVD by Criterion.

“Le Grand Amour” centers on Pierre (Mr. Etaix), a kind of Gallic Walter Mitty whose daydreams about women inspire both joyously funny and moving flights of fancy before and during his marriage to Florence (Annie Fratellini, the future Mrs. Etaix). Written by Mr. Etaix and his frequent collaborator, the brilliant Jean-Claude Carrière, the film has a directness and comic purity that a child would enjoy, with double takes, physical bits of business and slapstick that show Mr. Etaix’s debt to great clowns of silent cinema like Buster Keaton. Sprinkled throughout, though, are involved passages that spin gloriously, surrealistically, off the narrative rails, explaining why Luis Buñuel hired Mr. Carrière to help write masterworks like “Belle de Jour,” “The Discreet Charm of the Bourgeoisie” and “That Obscure Object of Desire.”

A tale of desire, memories and storytelling, “Le Grand Amour” opens from suitably lofty heights with an aerial view of a city and the sound of a woman singing about love and regret with aching, gently jaded knowing. Again and again she sings “I wait for you,” a promise or maybe just a concession that, after being repeated a few times, starts to sound a wee bit like a threat. Suddenly, the scene shifts inside a church where Pierre waits at the altar alongside Florence. The camera then quickly leaves them to trail after some of the others attending the wedding, taking snapshots of human moments like a man falling, a woman wheezing and a child crying.

Mr. Etaix likes to warm up his scenes in “Le Grand Amour” and initially it seems as if he’s idling on the edges, tagging after this or that person instead of cutting straight to the main attraction. But while the film hinges on Pierre and, to a lesser extent, Florence, their lives are bound up with those around them, particularly her parents but also friends, employees and passers-by. Pierre dreams of sweet liberation but he does so in a world in which his life, his kisses and fights, are determined by, and performed for, other people. Ever so lightly, Mr. Etaix evokes the idea that our lives are never our own, suggesting notions about ideology very much in circulation in the late 1960s.

That sounds heavy though “Le Grand Amour” is anything but, even in its more wistful interludes. Pierre is repeatedly thwarted yet his imagination, his memories and visions, free him, an emancipation mirrored in the storytelling. The first hint of deliverance appears at the wedding with Pierre, in a foreshadowing of his supplication, kneeling at the church and then merrily chasing Florence in flashback. “It had all started badly,” he says in voice-over, as if contradicting this happy scene. He starts describing his early love life over more flashbacks, at one point trying to recall where he met her. He thinks it was on a terrace. “That’s not right,” he says. It was “the Café de Paris.” You see him at a terrace and a cafe and then a waiter, exasperated, says, “Make up your mind.”