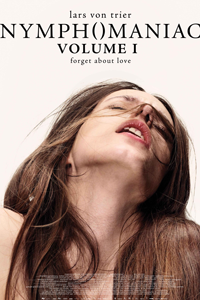 A dour modern Scheherazade keeps her interlocutor up all night telling him about a few of what might well be a thousand and one men in Nymphomaniac. Lars von Trier's two-part, four-hour sexual epic has been the subject of endless speculation since the perennial controversy hound began signing up name actors for what he advised would be a hard-core account of a very active woman's sexual life. It is that, although less so than many might have imagined or hoped for. Still, it is never boring and does provoke and stimulate, although not as a turn-on, not remotely. At its core the film represents an intellectual male artist's arduous, wayward, idiocentric, blunt, naughty-boy attempt to address Freud's famous question: “What does a woman want?”

As presently formatted, the title cards read Nymphomaniac Vol. 1 and Vol. 2, with full credits running after each installment for a combined running time of 245 minutes. A disclaimer at the start of both halves states that the director does not endorse this “abridged and censored” version prepared by the producer, although press notes supplied by Zentropa state that von Trier “approved this version” in order “to create cohesion between each country's distribution strategies.” Still, [...] there is no sense of material missing or stories foreshortened, and the cutting style and use of music are unmistakably those of the filmmaker. Nor does one go away hungry; this smorgasbord of talk and sex constitutes a very full meal.

“I'm just a bad human being,” warns Joe (Charlotte Gainsbourg) at the outset, as she's tended to by considerate older man Seligman (Stellan Skarsgard) after he's found her beaten up in an alley outside his flat. Refusing police or medical assistance, she rests in his bed and begins relating the story of her life with an emphasis on sex.

Each two-hour “volume” consists of four chapters and the title of the first one, “The Compleat Angler,” is borrowed from Izaak Walton's venerable book for the easy analogy fishing provides for teenage girls trolling for conquests, a competitive rivalry Joe (Stacy Martin in the flashbacks) signs up for after losing her virginity at 15 to young Englishman Jerome (Shia LaBeouf), whose approach to sex and motorcycles appears equally mechanical.

Joe's brazen friend B (Sophie Kennedy Clark) goads her into a contest over who can have sex with more men on a train. Dressed like tramps and quite direct in their approach, both girls make high scores, although Joe wears a blank expression during all her encounters and complains later that it hurt so much she thought she'd never want to have sex again.

Still, in addition to the sporting aspect, one senses a bit of self-empowerment at the root of things. Seligman admits, “This is beginning to amuse me,” and, like the king in One Thousand and One Nights, urges Joe to carry on. An avowed celibate, Jewish-born atheist and voracious reader who continually references authors and intellectuals of all persuasions, he lives like an ascetic priest, surrounded by his texts in shabby quarters that speak to a life of the mind and disavow creature comforts.

So on she goes, describing in scratchy voice and morose terms her denial of love (“just lust with jealousy added”) via refusing to sleep with any man more than once, a period followed by a renewed relationship (and child) with Jerome. Then come so many men she can't keep track of them all (illustrated by a rapid montage of penis close-ups); a mismanaged breakup with a married man whose cheated-upon wife (a ferocious Uma Thurman) turns what, in other hands, might have been a French farce into a blood-curdling circus; a black-and-white interlude of her beloved father (Christian Slater) enduring delirium tremens; and further admissions of how she regularly arranged trysts with as many as 10 men per day. No wonder she could never really hold down any job.

So often does Joe characterize her behavior as “shameful,” lament that “my pleasure was callousness” and insist that “loneliness was my constant companion,” that Seligman is obliged to point out how negatively she portrays herself. Although Joe's orgasmic moments provide fleeting delight, there is no evidence that her abundance of physical pleasure makes her happy, nor does she seem to get off on the excitement of the hunt, the way male equivalents of her character usually do.

In male-written literature, Don Juan-type characters have most often been portrayed with a certain amount of envy and admiration but with the moral caveat of having lived “empty” lives. With Joe, there is no sense of fun, of teasing, of enjoying her powers of manipulation. Nor does she exhibit genuine flirtatiousness or joie de vivre. Part of this no doubt stems from von Trier's own heaviness and melancholic tendencies (although he has directed genuinely funny work, especially The Idiots), but it must also derive from newcomer Martin's inexperience and pervasive inexpressiveness. The whole temperature of a film can be heavily influenced, even determined, by the heat a particular actress provides, so one can only wonder what Nymphomaniac would have been like had von Trier sought and found an equivalent of, say, Julie Christie in Billy Liar, Eva Green in The Dreamers or Jennifer Lawrence in almost anything.

Mindful of Flaubert's remark about Madame Bovary, one is tempted to speculate if von Trier would say, “Joe, c'est moi.” But even if that might be partly true (if only in his imagination), a great part of him might more readily be found in Seligman. Physically unimposing, the man is an intellectual voluptuary, ever-ready with perspectives drawn from Roman history, the Bible, Edgar Allan Poe, Thomas Mann and countless other sources. He's a voyeur with the pretense of brainy detachment. “There's nothing sexual about me,” he insists, but he's fascinated by her stories, he can't get enough.

There are flashes of hard-core action during the initial two hours -- the odd angle here and there, some insert shots -- but mostly the sex scenes look like pretty standard simulation. Volume two gets down in ways the first half doesn't, although anything resembling real sensuality remains MIA. Among the more vivid and/or extreme moments are Joe (now played by Gainsbourg) stuffing as many long spoons as she can up her vagina in a fancy restaurant, then letting them noisily drop to the floor as she walks out, to the astonishment of the waiter (Udo Kier, onscreen for less than a minute); a vividly shot three-way with two African men she's spied outside her apartment window; and in the film's most intense and protracted interlude, her venture into pain as pleasure at the hands of a professional S&M practitioner, played with withering coldness by Jamie Bell in scenes that are startlingly raw (as is, invariably, Joe's backside) and disturbingly transformative.

Finally fully embracing her status as a societal outsider, Joe finds that her unusual proclivities are well suited to a perverse job offered her by a high-end financial fixer, forcefully played by Willem Dafoe. Tied in with this is a relationship with a teenage girl (Mia Goth, lissome and unsettling) she takes under her wing that becomes extremely warped professionally, psychologically and emotionally. Von Trier offers a twist at the very end that will likely provoke drastically differing reactions. (One suspects he gave his lead character the name Joe just so he could appropriately use the great Billy Roberts song “Hey Joe” at the end.)

Novelistic in its chapter-designated structure, anecdotal richness and sensitivity to life's different stages, Nymphomaniac nonetheless shortchanges its central figure by so narrowly defining her. Despite spending four hours with her, except when she's with her father we seldom view her in anything but a sexual context; she never evinces any other interests and her reflective comments are invariably narcissistic, if negatively so.

In keeping with this, the entirely game Martin and Gainsbourg work in a tightly channeled emotional range, one that rarely allows Joe to look like she's having any fun. For most people, sex is a diversion or escape from ordinary life and commonplace sensations; when you organize your life to squeeze in 10 lovers per day, sex itself becomes the daily grind. Discovering the truth about herself finally brings Joe personal liberation in a certain way, but it still provides no happiness. The spiritual catharsis achieved by von Trier's greatest heroine, Bess, in Breaking the Waves, eludes Joe, who remains a prisoner of the physical.

The exchanges between Gainsbourg and Skarsgard remain mostly on the somber side but both actors keep the talk interesting. Affecting a British accent, LaBeouf doesn't really cut the figure of a guy who would command Joe's sustained interest over all other early candidates. Connie Nielsen is barely in it as Joe's distant mother.

Although shot by cinematographer, Manuel Alberto Claro, Nymphomaniac doesn't possess quite the lush, dark beauty of von Trier's last film, Melancholia, but it still has moments of striking physicality. Music choices are eclectic.