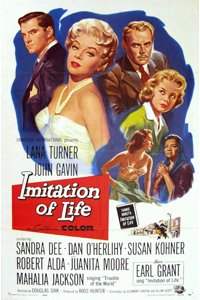 One of the masterpieces directed in the 1950s, the visually lush, meticulously designed and powerfully acted “Imitation of Life,” was the jewel in director Douglas Sirk’s crown, ending his Hollywood’s career before he returned to his native Germany.   It followed three other popular melodrams: “Blind Ambition,” All That Heaven Allows,” and “Written on the Wind,” all starring Rock Hudson.

The narrative is divided into two main chapters: The first, largely set in the 1940s, deals with Lora Meredith’s initial hard life, her slow rise to fame and her complicated relationships with men, including her seedy agent Alan Loomis (Robert Alda, father of Alan).  Though conscious of the price she pays for her ambition, she continues to alienate the people around her. “Maybe I should see things as they really are and not the way I want them to be,” she says tellingly early on. And indeed, a running motif of the film is the discrepancy between reality and appearances, which explains Sirk’s elaborate use of surface and mirrors.

The second, and main, part is set at present and shows a detailed portrait of Lora’s troubled relationships with all the characters around her, the angelic African-American Annie Johnson, the tormented Sara Jane who causes grief and embarrassment, and Steve Archer (played by the stiff and handsome John Gavin) whose love she initially rebuffs. Sandra Dee, just before becoming the most popular teen star in Hollywood, plays Turner’s daughter as a teenager, who falls for her mother’s beau.  She’s whining and resentful when she’s told she can’t marry mother’s boyfriend, who himself is uncomfort­able with Turner’s skyrocketing career.

Meanwhile, Sarah Jane grows into a vapid and tormented woman, who cruelly brings on her mother’s death by dating white boys (including Troy Donahue), beaten by them when they discover her race, and running away from her mother, while performing in shabby nightclubs while denying her past.

The movie ends on a glorious note: A dying Annie Johnson requests the funeral she has always wanted, “four white horses and a band playin,” and her wish is fulfilled with Mahalia Jackson belting out in full volume “Trouble in the World.”

Lana Turner’s shiny blonde hair, elaborate coiffures, and glitzy costumes (she changes outfits in every scene) may call attention to themselves, but they are essential attributes of and complementary to her powerful and sympathetic performance.  With this picture, Turner reached the height of her acting career, marked with one Oscar nomination, also for a terrific turn, in the small-town melodrama “Peyton Place,” two years earlier.  (Critics who claim that Lana Turner was a “plastic Hollywood star” who could not act, should watch these two pictures).

“Imitation of Life” and the other Sirk melodramas have inspired the work of such gifted directors as German Rainer Wener Fassbinder (too many melodramas to name here), Spaniard Pedro Almodovar (“High Heels,” and others) American Todd Haynes (“Far From Heaven” in 2002).