Lonely are the Brave 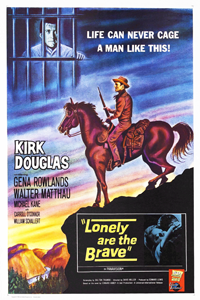 We’re pulling former CWA head and Film Studies professor Jim Palmer out of his retirement to give an introduction to this film, because it’s near-and-dear to his heart.

Dalton Trumbo wrote this elegy to the western. Kirk Douglas gives one of his finest performances as an out-of-place cowboy in the modern west--almost like a time traveller.

The theme of the film is eloquently set up by the opening of the film in which we see Douglas reclining beneath a clear and spacious western sky. The peace and quiet is suddenly disrupted by the sound of a jet plane passing overhead. This brings a wry smile to the old cowboy's face.

He rides his horse into Albuquerque to visit friends Kane and Rowlands. Rowlands tells him that her husband has been jailed for helping Mexicans enter the US illegally. Douglas starts a brawl in a saloon to get put into jail; there Douglas offers his friend Kane help in breaking out, but Kane tells Douglas that he wants to serve his brief time, intends to play out his hand with the law, and refuses to become a fugitive. Douglas is hurt but undaunted.

Douglas is superb as the cowboy who will not yield to the modern world. Miller's direction is excellent, this being the finest film in his career. Matthau is also convincing as the understanding sheriff who tries his best to capture a man he does not want to see locked up. Lathrop's sharp black-and-white photography and Goldsmith's evocative score add measurably to this outstanding production. There is one particularly memorable scene as Douglas and his good old horse attempt to cross a busy highway with the eighteen wheelers barrelling by. It will stay with you forever.

Lonely are the Brave