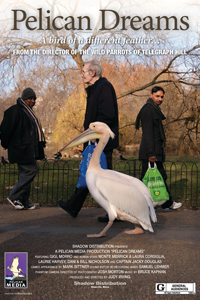 A brown pelican got stuck on the Golden Gate Bridge in 2008 and stopped traffic. A tow-truck driver scooted it out of harm's way with a towel and a police officer lifted it into the back of a cruiser.

"It got arrested," said one of the cyclists who captured the moment on video.

Sent to rehab, is more like it. Judy Irving, the director of the charming documentary "The Wild Parrots of Telegraph Hill," found out the pelican had been taken to a nearby wildlife rehabilitation center. Irving started filming the bird's recovery and named it Gigi after the bridge where it was found. The rehab specialist in charge referred to it as Pink-193, the code on its tracking band, and explained that the center doesn't name the birds in its care because it doesn't want to think of them as pets and tries not to make eye contact -- even though the pelicans initiate it -- because it wants them to remain as wild as possible.

That contrast, between naming a pelican Gigi and calling it Pink-193, is at the heart of "Pelican Dreams," Irving's lovely documentary on the large, oddly graceful birds known as "flying dinosaurs" for their prehistoric appearance. Brown pelicans live near the ocean (their white cousins are inland) and feed on fish (sardines!) by diving and scooping the meal into their pouch, then drain the water and swallow the food. They are mostly silent and altogether amazing.

Irving is captivated by pelicans and captures them in full flight and slow-motion dives. She finds another rescue pelican named Morro that is unable to fly and becomes a houseguest/member of the family to a bird-whispering couple that doesn't look at anthropomorphization as strictly as the rehab center does. What happens to Gigi and to Morro gives "Pelican Dreams" a necessary structure and tension, as do the external threats to pelicans: the birds were almost wiped out by pesticides before DDT was banned and more recently are threatened by climate change and by oil spills and entanglement in fishing lines.