A winner at Cannes 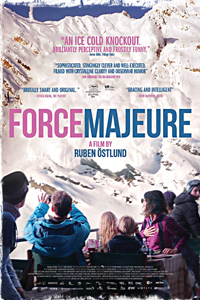 If a man abandoned his lunch, grabbed his cell phone and fled the avalanche that was roaring toward the deck of the ski-lodge restaurant where he happened to be dining, we’d probably applaud his good judgment and quick reflexes.

But in the case of Tomas (Johannes Kuhnke), that very incident raises questions about Tomas’s manhood and his commitment to his marriage. Why? When Tomas bolts, he leaves his wife Ebba (Lisa Loven Kongsli) and two children to fend for themselves.

As it turns out, the avalanche — triggered by a controlled explosion of the kind ski resorts use to ward off major slides — never reaches the restaurant? The episode is a scary false alarm.

Not surprisingly, Tomas has difficulty admitting what happened. But Ebba, who struggled to save her son and daughter, can’t put the incident out of her mind.

Although Force Majeure takes place in a French Alpine ski resort, it’s hardly a movie about the virtues of the great outdoors. Rather, it’s a probing look at a marriage in which a single event exposes what surely must have been long smoldering issues in the lives of this picture-book couple.

As the movie progresses, Swedish writer/director Ruben Ostlund exploits these marital tensions: An ideal vacation — designed to give Kuhnke’s character a chance to spend more time with his kids — quickly turns into an agonized nightmare.

No matter what Tomas says, it’s clear that Ebba isn’t going to give him the benefit of any doubt. She finds his behavior abhorrent on two counts: first, that he bolted, and second that he refuses to own up to it.

Things come to a head when Ebba brings the subject up in front of two other skiers, Tomas’s divorced friend Mats (Kristofer Hivju) and the young woman (Fanni Metelius) with whom Mats is vacationing.

In an effort to help, Mats tries to chalk the incident up to natural survival instinct, something beyond Tomas’s control. Obviously, Ebba isn’t willing to buy into any such a rationalization.

It probably means something that Hivju’s Mats has flowing red hair and a thick beard: He’s a kind of Viking adventurer who’s now plying a sea of younger women. When he and Tomas try to restore a bit of macho camaraderie, the movie takes on comic overtones.

Ostlund’s marriage-conscious screenplay also introduces Ebba to a woman in an open marriage. This woman seems entirely relaxed about taking a break from her husband and pursuing sex with strangers.

Ebba may be upset by her husband’s behavior, but she doesn’t understand open marriage. Her views remain conventional.

The questions raised by Force Majeure are right on the surface. Are we wrong in assuming that men will act bravely in any situation in which their families are threatened? Has the marriage between Tomas and Ebba hinged on a fiction they no longer can be sustained? On an unconscious level, was Tomas trying to shed the weight of family and responsibility? Is there any way to dig out from the avalanche of issues that Ostlund so skillfully raises?

There’s a big, emotional scene that I thought might go a bit too far, and a late-picture incident — which can’t be talked about here — at first struck me as a bit of a copout. But it can be seen as something quite different if you reflect a bit on who these characters are, particularly Ebba.

Sorry to be vague, but how else to talk about a movie that’s better discussed with others after they’ve seen it.

Meanwhile, it’s worth reiterating that Ostlund has made a film that — quite atypically — explores issues of failed manhood, and then goes on to examine the role of illusion in sustaining a marriage.