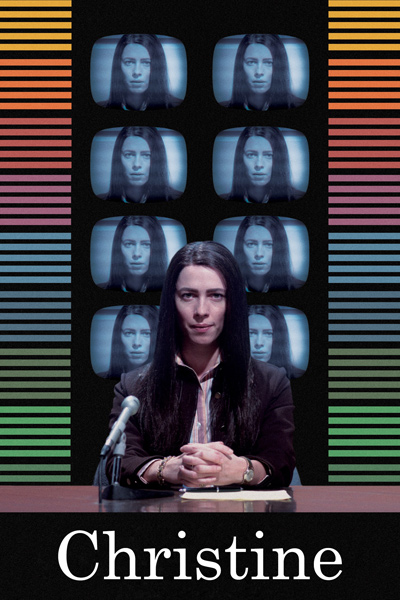 Hollywood has never seemed to know quite what to do with Rebecca Hall. The stunning British actor came to the industry’s attention with a scene-stealing turn in Christopher Nolan’s magician thriller The Prestige, shortly followed by a juicy role in Woody Allen’s Vicky Cristina Barcelona. But since her arrival, Hall has largely languished with supporting roles in films that in no way prepare you for the breadth she displays in director Antonio Campos’s tragic character study, Christine.

Hall completely immerses herself in the role of Christine Chubbuck in Campos’s stark retelling of the story that led to the television news reporter’s suicide live on air, aged 29, in 1974. It’s one of two films on the subject at Sundance this year – the other is the documentary Kate Plays Christine.

First seen on the set of WZRB’s station in Sarasota, Florida, analysing footage of herself in closeup, from the outset Campos depicts Chubbuck as an extreme perfectionist with a relentless drive to succeed in the male-dominated business. As portrayed by Hall, it’s also made immediately apparent that Chubbuck lacks the requisite on-camera appeal that her job calls for: interviewing subjects, she comes across as sedate and cold. When commissioned to interview a local fruit-seller for a light news segment, she can’t even feign a genuine smile for her audience.

Craig Shilowich’s script suggests that Chubbuck’s frosty on-air disposition stemmed from her inability to connect with people. Her only close ally is Peg, her mother (J Smith-Cameron), with whom she shares a small apartment. And although she harbors a crush on her handsome co-anchor, George Ryan (Michael C Hall), Chubbuck rejects his advances, scared to confront the feelings he stirs up.

Despite her ambition at work, Chubbuck at first rejects a mandate delivered by her station manager (Tracey Letts) to deliver more exploitative “crisis” stories, priding herself on her serious brand of issue-driven journalism. Seeking a promotion, she eventually relents, but struggles to deliver what her boss wants.

Chubbuck, at her wits’ end, begins to crack. Picking up on her daughter’s impending meltdown, Peg alludes to a bad episode in Boston that caused Chubbuck to relocate, worried that history will repeat itself.

To her colleagues, Chubbuck is impenetrable (“You’re not always the most approachable person,” she’s told by Ryan), but Campos invites empathy in his portrait of a woman on the verge. His last film, Simon Killer, saw Campos take the opposite approach, by probing the darkest recesses of a troubled mind in a detached manner that was discomfiting.

In Hall, he has the perfect actor to convey Chubbuck’s internal struggle in a manner that’s devastating.

UK, 2016, in English, Color, 119 min, Rated R for a scene of disturbing violence and for language including some sexual references • official site