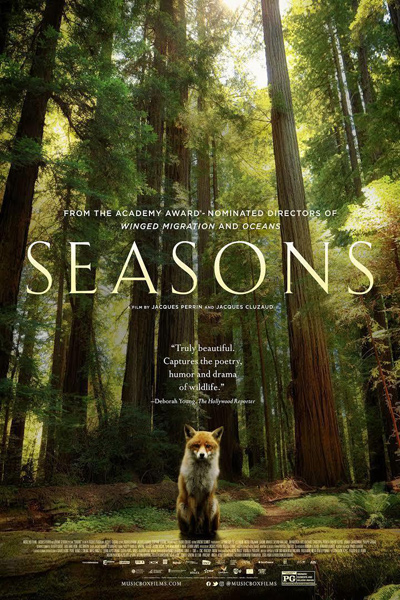 “Seasons,” the new wildlife documentary epic from award-winning French co-directors Jacques Perrin and Jacques Cluzaud, is another testament to the breathtaking wonder of the natural world. After celebrated journeys alongside denizens of the air (“Winged Migration”) and sea (“Oceans”), the pair have trained their technologically versatile cameras primarily on land animals, along with a framing device — using scant, history-establishing narration — meant to evoke the forest-rich Europe just after the Ice Age that heralded a true kingdom of thriving beasts.

It’s a dazzlingly photographed, mobile depiction of an animal paradise rich with feeding, roaming and hunting, and skillfully edited to portray this cast of the furry and feathered — wolves, horses, bison, hedgehogs, owls, among others — as everything from action stars and family heroes to masters of the comic reaction shot. (A squirrel peeking out of a tree hole is a favorite cutaway here.)

Where you might raise an eyebrow is with the use of humans in hunter-gatherer garb as space-sharing extras, or when the movie’s ecological message in the final act replaces animals doing their thing with the signposts of human impact: industry, cities, cultivated landscapes. As a mood killer and conscience-raiser it’s woefully obvious, but also unlikely to erase the sense memory of all the scintillatingly captured fauna that came before it.