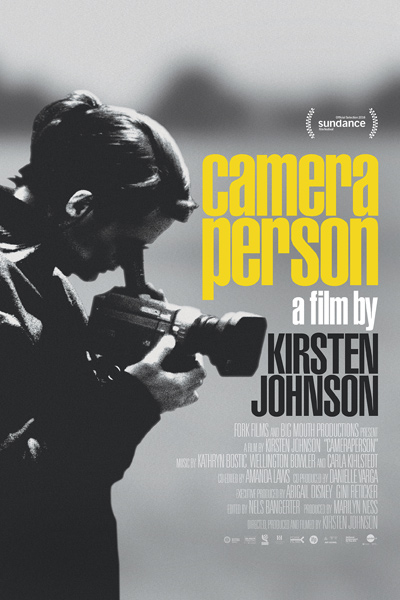 In a season glutted with issue-oriented documentaries about topics as diverse as criminal justice and the creation of the universe, Kirsten Johnson’s “Cameraperson” feels like both a soothing balm and a wake-up call. Johnson is best known as a cinematographer with some of the best eyes in the business. Her patient, unerringly well-judged sense of framing has informed such groundbreaking documentaries as “The Invisible War,” about sexual assault in the military; “Trapped,” about restrictive abortion laws; “Happy Valley,” about the rites and rituals of Penn State’s aggressive athletic culture; and “Citizenfour,” featuring Edward Snowden in the days leading up to his massive leak of national security documents.

In “Cameraperson,” Johnson has taken footage from those and several other films she’s photographed to create an essay about how the events she’s captured behind the camera — events that have often involved the aftermath of heart-wrenching trauma — have affected her and, to use her own language at the beginning of the film, left their marks.

In a series of quiet, contemplative outtakes, Johnson shows us the world as she has experienced it over the past 25 years, visiting Kosovo, Afghanistan, a secret prison in Yemen, a maternity ward in Nigeria, a quantum physicist at the University of Texas and her own mother, who suffered from Alzheimer’s disease, at her childhood home in Wyoming. Edited with superb attention to timing and detail by Nels Bangerter, “Cameraperson” draws the audience into Johnson’s own rhythms and openhearted relationships with her subjects, as she draws them out, eats and laughs and cries with them, gently pushes them to disclose a little bit more, and, frequently, allows herself to be obviously and profoundly moved.

As a candid glimpse of how documentaries are made, “Cameraperson” is a fascinating tutorial for artists and audiences. (At one point, the director Laura Poitras can be heard asking Johnson whether she should repeat a particularly cinematic action, revealing just one of several tricks of a trade that often presents itself as unstudied and spontaneous.) Although free of narration or explicit suggestion, Johnson has created a primer in filmmaking ethics, from interacting with sources to whether and how to crop images and stage scenes.

Even more valuable, though, is how Johnson so poetically expresses the emotional costs of documentary work — her high degree of identification with suffering, and her ambivalence surrounding bearing witness to her subjects’ most intimate, painful moments — and how, at its finest, film creates space for empathy and compassion. (In its alert, discursive cosmopolitanism, Johnson’s work most closely resembles the restless essay films of Jem Cohen.)

At one point, a scientist Johnson is filming describes how pieces of matter can affect each other across time and space. In a mesmerizing series of images, encounters and delicate juxtapositions, “Cameraperson” testifies to a world in which it would be clear to see that we’re all connected, if only we took the time to look at one another with reverence and simply listen.