Down in the Valley

Ed Norton as a disillusioned cowboy 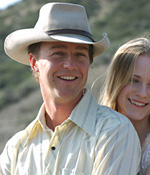 Listening to suburban cowboy Harlan drawl, "I'll be at my spread," is to once again watch awestruck as Edward Norton quietly tumbles through his character gymnastics.

Harlan rambles the San Fernando Valley like a cowpoke on leave from the high plains, tipping his dopey hat to the ladies and promising skeptics he will earn their trust. His "spread" is a seedy apartment in a converted motel; his mount is a kitchen chair he lassos when bored. Ranch work consists of re-creating Western movie shootouts in his living room.

Harlan, in his 30s, has his big, untrustworthy heart set on Tobe (Evan Rachel Wood), the rebellious and languidly beautiful teenage daughter of a local jail sheriff (David Morse). Harlan courts her with studied yokel aplomb, treating her like a prairie princess and wooing her with his horse sense.

[Writer and director David] Jacobson sets up his modern tale to be a High Noon classic: Dad the sheriff has a serious gun collection, while Harlan loves to twirl pistols with a flair that means either his guns are fake or Harlan is lethal. But Norton sells it, as far as all of this can possibly go. Even if you doubt some of the action, you never doubt the existence of Harlan, a man out of time and out of options. (M. Booth, Denver Post)

Down in the Valley