Days of Waiting / The Mushroom Club 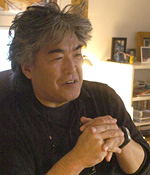 Academy Award winning filmmaker Steven Okazaki will screen two films. DAYS OF WAITING is a powerful film about one of the few Caucasian women to follow her husband into an internment camp. Through her art, she documented one of America's darkest periods. THE MUSHROOM CLUB reflects on the legacy of the Hiroshima bombings 60 years later.Sponsored by: The World Affairs Athenaeum and The Roser Visiting Artist Program and the One Book One Boulder program

Days of Waiting / The Mushroom Club