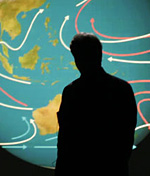 “An Inconvenient Truth” is scary stuff; it paints a gloomy future ravaged by global warming. But it also prescribes solutions, many of which are within the power of every individual.

By and large, “An Inconvenient Truth” is Gore’s global warming “slide show” put to film. It’s a class he’s taught hundreds of times now so, unlike the stiff, poll-directed automaton of presidential elections past, here Gore speaks with confidence and energy.

The material presented is worth listening to, regardless of the side of the political fence upon which one tends to fall. Some of the topics even get the blood boiling, seeing the games people play, the lobbying, the lack of future consideration, the interest in protecting the status quo.

Gore’s passion and humanity are clearly on display in this movie. He’s no longer the stiff man without a sense of humor (who also stakes claim to creating the Internet). His pleasant, conversational style is enough to make one question the entire electoral process and media coverage that breaks a candidate down to a pollster’s pawn and a 10-second sound bite. (M. Anderson, Movie Habit)