The emotional toll of the occupation of Iraq 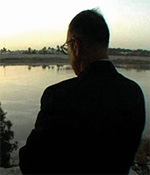 From its plaintive title to its melancholy soundtrack, “My Country, My Country” is an appropriately mournful look at the chaos of Iraq under American occupation. Filmed over the course of eight months, from June 2004 to February 2005, this documentary views the run-up to the January elections for the national assembly primarily through the eyes of Dr. Riyadh, a Sunni candidate and physician who runs a free clinic in Baghdad. It is a reflection of the situation in Iraq that the director, Laura Poitras, decided not to disclose the doctor’s last name for the sake of his security, even though it has been made public.

Soft-spoken and dignified, Dr. Riyadh offers medicine, advice and sometimes money to patients traumatized by years of violence and uncertainty. Yet a pall of failure hangs over the film as he tries to dissuade the Sunni leadership from boycotting the elections and argues with the United States military over the incarceration of a 9-year-old boy. Around him the movie teems with American soldiers, United Nations officials and private security contractors, as well as Kurdish militia and mujahedeen. At home his outspoken wife, Samera, and six children wonder if voting will get them killed.

Without comment but with unusual sensitivity, Ms. Poitras, exposes the emotional toll of occupation on Iraqis and American soldiers alike. Nosing around in rubble-strewn neighborhoods and peering through the wire at prisoners in Abu Ghraib, Ms. Poitras and her camera find little to celebrate. “My Country, My Country” may appear to be strictly observational, but its images and structure inevitably question the legitimacy of democracy at gunpoint, leaving us with the feeling that this particular mission is far from accomplished. (J. Catsoulis, New York Times)