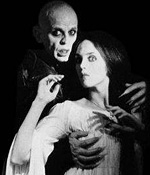 To watch F.W. Murnau's ``Nosferatu'' (1922) is to see the vampire movie before it had really seen itself. Here is the story of Dracula before it was buried alive in cliches, jokes, TV skits, cartoons and more than 30 other films. The film is in awe of its material. It seems to really believe in vampires.

Max Schreck, who plays the vampire, avoids most of the theatrical touches that would distract from all the later performances, from Bela Lugosi to Christopher Lee to Frank Langella to Gary Oldman. The vampire should come across not like a flamboyant actor but like a man suffering from a dread curse. Schreck plays the count more like an animal than a human being; the art direction by Murnau's collaborator, Albin Grau, gives him bat ears, clawlike nails and fangs that are in the middle of his mouth like a rodent's, instead of on the sides like on a Halloween mask.

In the long run Murnau was the making of Stoker, because ``Nosferatu'' inspired dozens of other Dracula films, none of them as artistic or unforgettable, although Werner Herzog's 1979 version with Klaus Kinski comes closest. ``Nosferatu'' is a better title, anyway, than ``Dracula.'' Say ``Dracula'' and you smile. Say ``Nosferatu'' and you've eaten a lemon.

In a sense, Murnau's film is about all of the things we worry about at 3 in the morning--cancer, war, disease, madness. It suggests these dark fears in the very style of its visuals. Much of the film is shot in shadow. The corners of the screen are used more than is ordinary; characters lurk or cower there, and it's a rule of composition that tension is created when the subject of a shot is removed from the center of the frame. Murnau's special effects add to the disquieting atmosphere: the fast motion of Orlok's servant, the disappearance of the phantom coach, the manifestation of the count out of thin air, the use of a photographic negative to give us white trees against a black sky.

Is Murnau's ``Nosferatu'' scary in the modern sense? Not for me. I admire it more for its artistry and ideas, its atmosphere and images, than for its ability to manipulate my emotions like a skillful modern horror film. It knows none of the later tricks of the trade, like sudden threats that pop in from the side of the screen. But ``Nosferatu'' remains effective: It doesn't scare us, but it haunts us. It shows not that vampires can jump out of shadows, but that evil can grow there, nourished on death. — Roger Ebert