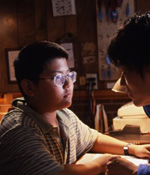 Like a teenager struggling to stick out and fit in at the same time, Michael Kang makes his feature debut with "The Motel," a well-worn coming-of-age tale enlivened by pungent detail and a sharp visual sense. Ernest Chin (Jeffrey Chyau) is a tubby, awkward 13-year-old Chinese American who cleans rooms at his mother's suburban no-tell motel. He's also a budding writer who's just won "honorary mention" in a short-story contest, but his unforgiving mother, Ahma (Jade Wu), is not impressed. Honorable mention, she says, "is worse than losing."

Abandoned by his father, Ernest finds a substitute in Sam Kim (Sung Kang), a self-assured Korean American who squires an endless succession of prostitutes past Ernest's awestruck eyes. Sam's cocksure posturing is thrilling to Ernest, whose post-tryst cleanups have done little to prepare him for the onset of puberty, as his painful flirtation with a pretty older girl (Samantha Futerman) makes abundantly clear. But even Ernest sees through Sam's act after a visit to the self-styled playboy's former house, where Sam's estranged wife has already started rearranging the furniture.

In the kind of offhand but carefully considered touch that lifts "The Motel" above a crowded pack, an anxious Ernest, whom Sam has ill-advisedly brought along on his home invasion, catches sight of a rack of carpet slippers, then looks unsteadily at his own feet. Perhaps he's worried about leaving tracks or wondering if stepping into Sam's shoes is really such a good idea. Thankfully, "The Motel" doesn't make too much of such fleeting moments. Ernest won't understand their import for years to come, and it's all right if we wait a little while as well. (S. Adams, Los Angeles Times)