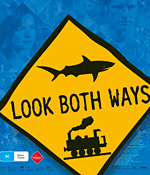 If the title of this ambitious, mostly-live-action feature debut by Australian animator Sarah Watt sounds like an admonishment to a child about to cross a road, that's the general idea. There's an odd epidemic in "Look Both Ways" of inattentive pedestrians stepping on railroad tracks and getting hit by trains. Those folks certainly pay for not seeing what's coming. But a handful of characters in Watt's film are making more metaphorical crossings and can't possibly know what's about to plow into them: death, love, reaffirmation, change. How each person copes with trauma and renewal adds up to a tender tale rich in memorable performances.

Newspaper photojournalist Nick (William McInnes) is reeling from word he has cancer — only months after the painful passing of his father. He tells his shocked editor, Phil (Andrew S. Gilbert), but not a reporter, Andy (Anthony Hayes), who asks Nick to bring his camera to the scene of (yet another) death on a train track. Andy has been working on a theory that some of these accidents are really acts of suicide. At the site of the tragedy, the victim's wife, Julia (Daniela Farinacci), looks on as police interview a witness, Meryl (Justine Clark), an illustrator on her way back from a family funeral. Also present is the train's emotionally distraught driver (Andreas Sobik).

The air is thick with regret, but Watt skillfully captures that insistent element in human nature, turning loss into an opportunity to cherish life. More important is the fact that Watt doesn't deny her characters a fully rounded humanity despite despair. Nick flirts, Meryl laughs at herself, Andy feels foolish. Watt demystifies angst with a fine script and cast, and an excellent eye. She's a director to watch.(T. Keogh, Seattle Times)