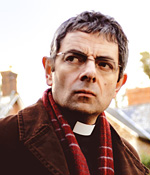 There was a time when the art of a good murder was the basis for many an entertaining British comedy. I hesitate to make any kind of comparison with Kind Hearts and Coronets or The Ladykillers, but you know what I mean. Murder on film has become brutish, violent and obvious. It's a pleasure therefore to see a British film which revives the grand tradition of black comedy, although without ever reaching the heady heights of those Ealing classics.

Keeping Mum begins in the early Sixties with a young woman detained on a train because of a problem with her luggage - it's oozing blood. It turns out to contain the remains of her philandering husband. Forty years on the Reverend Walter Goodfellow (Rowan Atkinson) is struggling to keep it together in his small rural parish. His wife, Gloria (Kristin Scott Thomas), has given up on their marriage and is on the brink of an affair with the local golf pro (Patrick Swayze). His daughter (Tamsin Egerton) is cutting a swathe through the ranks of the village boys while his son (Toby Parkes) is being bullied at school. On top of that his congregation is dwindling and Walter himself is being bullied by the remorseless Mrs Parker (Liz Smith).

Enter Grace Hawkins (Maggie Smith). She has come to be the new housekeeper and, like a psychotic Mary Poppins, she starts to put things right through some very extreme measures.

What director Niall Johnson has done is take a tried and trusted formula and use it to make an unspectacular but perfectly entertaining film. Keeping Mum is never going to win any awards but it's a film that does exactly what it says on the tin and provides an undemanding evening out. (E. Dougan, Evening Times)