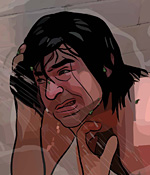 Keanu Reeves and Robert Downey Jr. star in Richard Linklater's druggy and dystopian adaptation of a Philip K. Dick (BLADERUNNER) novel, a masterpiece from 1977 about an undercover narcotics officer. Linklater uses the rotoscoping technologies he pioneered in WAKING LIFE here to full effect, and also delivers the most studiously faithful adaption of any Philip K. Dick work to date.