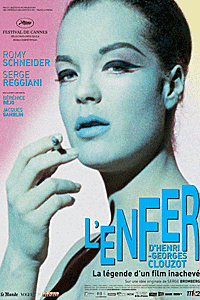 Henri-Georges Clouzot (1907–1977) once personified a commercial cinema of quality, having produced and directed France's two great post–World War II, pre–New Wave international hits, the pop existentialist Wages of Fear (1953) and the marital thriller Diabolique (1955), as well as the classic middlebrow art-doc Mystery of Picasso (1956). Now the long-passé "French Hitchcock" reappears as the subject of Henri-Georges Clouzot's Inferno, a title with a double meaning.

Directed by film archivist Serge Bromberg and intellectual property lawyer Ruxandra Medrea, and shown once at last year's New York Film Festival, Clouzot's Inferno is a posthumous psychodrama that, according to Bromberg, grew out of a chance encounter in a stalled elevator with Clouzot's widow. The archivist persuaded her to give him access to a particular holy grail: the surviving 15 hours of rushes and test footage from Clouzot's abandoned, would-be masterpiece, Inferno.

Inferno was meant to portray jealousy as a form of mental illness, but the real head-case was its director. Caught up in his own idée fixe, Clouzot was unable to finish the movie; as both the survivors interviewed and the surviving footage included in Clouzot's Inferno make clear, the attempt drove him half-mad. "I don't think I'm pathological," Clouzot is seen telling an interviewer at the outset of this documentary's portrait of the artist as an actor-abusing, perfectionist, control freak . . . with a vision.

Four years after his laughably programmatic 1960 youth film La vérité (Brigitte Bardot on trial as the bourgeois-shocking sex goddess of the Latin Quarter), and following an apparent nervous breakdown, Clouzot made another bid for relevance. He planned to go all nouveau vague with a hallucinatory psychological thriller that, in its opaque subjectivity, owed a bit to Last Year at Marienbad scripter Alain Robbe-Grillet's 1957 novel Jealousy. Clouzot's protagonist, played by sad-faced tough guy Serge Reggiani, was the middle-aged proprietor of a provincial hotel on a picturesque lake, insanely suspicious of his hot, young wife—the movie's commercial engine, Franco-Austrian superstar gamine Romy Schneider.

Some of these monumentally cheesy effects would appear in Clouzot's misanthropic swan song, La prisonnière (1968), but as shown here, divorced from any script—and applied mainly to Schneider—the tricks become Inferno's monomaniacally obsessive subject. Rather than communicating his protagonist's madness, Clouzot appears to be documenting his own. An insomniac who regularly rousted collaborators in the middle of the night, he was also a taskmaster who refused to give his crew Sundays off and demanded everyone be available for work at all times. Clouzot had only a limited time to use his lakeside location; the pressure intensified when he became hung up on several scenes, endlessly reshooting them. Exhausted by Clouzot's demands that he continuously run around the lake, Reggiani quit a week and a half into the production; some days later, possibly while shooting (or more likely reshooting) the big lesbian scene between Schneider and fellow she-demon Dany Carrel, the director collapsed. C'est fini.

Running on a dual narrative track, Clouzot's Inferno keeps some of the original story by using stand-ins to dramatize key scenes. This is far more effective than Inferno's previous remake, Claude Chabrol's 1993 L'enfer. Bromberg and Medrea studiously ignore that film, although Chabrol's mediocre actualization of the script takes on new interest now that we know his finale is actually the crack-up that Clouzot was unable to shoot. In effect, Clouzot's Inferno is that crack-up. Who knows how these fantastic shots of Schneider lying naked in the path of an onrushing locomotive or covered with glitter and smoking a cigarette in reverse, or Reggiani dashing before a shifting landscape miasma or hovering above the sleeping actress, hands pressed against an invisible glass wall, would have played in the finished film? Who cares?

The recurring close-ups of Schneider wagging her blue tongue at the camera or the head-on shots of her slo-mo undulations on water skis are images out of time, stills from an acid trip untaken. For all the irrationality that fueled Clouzot's project, it's reasonable to assume that the finished Inferno would never have been any better or more evocative than this arrangement of its shards.

A less-overheated docu-fiction hybrid, Pedro González-Rubio's Alamar—winner of the Rotterdam Film Festival's Tiger Award for an emerging filmmaker—records, as it partakes of, a five-year-old boy's dream vacation. Natan Machado Palombini, born of a brief romantic liaison between Italian tourist Roberta Palombini and Yucatán tour guide Jorge Machado, leaves Rome to stay with his father in a visit so timeless than it might be an entire summer or a single day.

Jorge, a lithe, long-haired child of nature with a discreet yin-yang tattoo, takes his son to Banco Chinchorro, to stay on a mangrove-covered barrier island off the southernmost coast of Quintana Roo, Mexico. There, in the company of a grizzled old fisherman, they dive for langostas, doze in hamacas, feast on fresh-caught barracuda with fresh-made tortillas, and live in a shack on stilts. Natan learns how to snorkel and catch a fish, coping with crocodiles as well as the camera.

González-Rubio shot the movie himself. Although the cameraman's presence is occasionally acknowledged by young Natan's glance, the natural world is neither blatantly anthropomorphized nor unduly dramatized, despite Jorge's ability to talk to the birds. Underwater reef exploration aside, the big thrill is the little egret that several times appears at the shack, looking for bugs, and receives the name "Blanquita." The bird's subsequent disappearance is accepted as a law of the universe; Natan makes a drawing of Blanquita, along with sketches of stingrays and the camera, to toss in a bottle and send off on the shining sea.

Natan's parting is similarly unforced. Before the boy returns home to Rome (where he is last seen with Mom, feeding fish in the park), Jorge promises Natan that no matter where he is, his father will be looking after him. However blunt, this sudden introduction of primal faith is wholly appropriate. As much home movie as neorealist non-narrative, Alamar provides a nearly hypnotic immersion in the brilliantly aqua, impossibly tranquil Caribbean—a Paradise Regained not just for Natan, but for everyone.