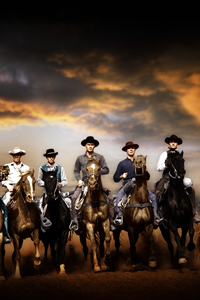 If you’re seeking the link between the darkly intense horse operas of the late 1950s and the down-and-dirty spaghetti Westerns of the mid-1960s, look no further than The Magnificent Seven,, John Sturges’s immensely popular and enduringly influential 1960 action-adventure about hired guns who get a shot at redemption—and many more at the rapacious bandits who terrorize the Mexican farmers they’re employed to protect.

With an Akira Kurosawa masterwork—1954’s Seven Samurai—as his inspiration and a posse of rising stars in his cast, Sturges established the template for countless sequels, homages and unauthorized knock-offs (including, no kidding, a low-budget sci-fi variation, Battle Beyond the Stars, scripted in 1980 by John Sayles). But the original remains uniquely satisfying, being at once a rousingly old-fashioned tale of tarnished heroes who remain courageous under fire and a thoughtfully revisionist meditation on the ways of men who live by their guns. Chris Adams (Yul Brynner), the man in black who is first among equals, has few illusions about what sets him and his confederates apart from lesser mortals: “It’s only a matter of knowing how to shoot a gun. Nothing big about that.” Trouble is, such expertise is in short supply among the farmers whose remote village is repeatedly plundered by Calvera (Eli Wallach), the bandit leader who makes no apologies for exploiting the helpless. “If God did not want them sheared,” he sneers, “he would not have made them sheep.”

And so, at a time when “gunmen are cheaper than guns,” Adams can afford to assemble six straight-shooters—played by Steve McQueen, Robert Vaughn, James Coburn, Charles Bronson, Horst Buchholz and Brad Dexter—to help him even the odds in favor of the farmers. In the end, the meek really do inherit the earth. But their protectors are the ones who pay the price for being in a class by themselves.