If I Want to Whistle, I Whistle 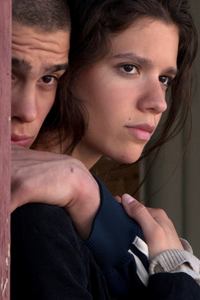 In the post-Soviet world, two decades since the overthrow of Stalinist dictator Nicolai Ceausescu, Romania has struggled to forge a new identity; the restless young filmmakers now at work in the beleaguered nation—Titus Muntean, Ruxandra Zenide, Cristi Puiu and others—comprise its New Wave. Florin Serban’s feature debut, set amid the violent intrigue of a reform school, sheds more light on the tensions of a society in dangerous flux.

Adapted from a play by Andreea Valean, the drama focuses on a teenager named Silviu, who has almost completed a four-year sentence for an unspecified crime. Then his beloved younger brother (Marian Bratu) comes to visit; Silviu learns that their mother means to take the younger boy with her when she returns to her job in Italy—and old family tensions begin to simmer anew. Silviu’s due to be released in five days, but at a meeting with social workers he erupts, takes a pretty young woman hostage and blunders forward into an uncertain future.

Serban auditioned nonprofessional actors for seven months before casting his film, and in young George Pistereanu (who plays Silviu)—a high-school student from Bucharest—he found just the combination of defiance and vulnerability he was looking for to convey the plight of Romanian youth in troubled times. His sympathetic portrait of the boy and Ada Condeescu's nuanced performance as the kidnapped social worker make for profound emotional interplay.

If I Want to Whistle, I Whistle