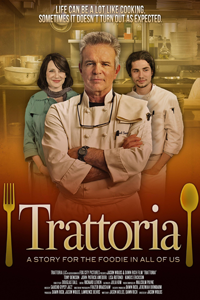 Inspired by real chefs and the screenwriters’ real-life experiences in the restaurant business, TRATTORIA is a dramedy set in the San Francisco restaurant world about a workaholic chef and his estranged son who must reconnect and heal their past through cooking in order to change the direction of their lives.

TRATTORIA includes interviews of real chefs from the San Francisco Bay Area. The chef interviews give real-world context to the main characters’ stories about passion, cooking, and life.

Note: A panel discussion on work/life balance in the restaurant industry, followed by lunch, will take place on Saturday, October 18th, 11am at Jax Fish House in Boulder.