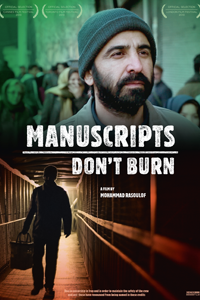 Depicting his combustible material with a cool head and a steady hand, the Iranian filmmaker Mohammad Rasoulof — defying a 20-year government ban on his work — makes “Manuscripts Don’t Burn” a slow-motion explosion of anti-authoritarian rage.

Perhaps too slow, as the film’s methodical pacing and often elliptical dialogue (these are characters who have learned to choose their words very carefully) demand a commitment to the early scenes that takes a while to pay off. By the midway point, however, we feel the clammy grip of a measured political thriller as the story hops between the comfortable Tehran home of a chronically disabled writer and the unsavory road trip of two government-hired killers.

Their mission is to track down copies of a manuscript that the writer plans to publish privately. Its subject is the government’s attempted assassination of a busload of intellectuals many years earlier — a potential embarrassment to a powerful state censor who once shared the writer’s beliefs. Contrasting the high-minded battle of words between these two men with the gruff efficiency of the killers (one of whom enjoys a snack while watching a victim slowly expire), Mr. Rasoulof seems to be mourning the futility of fighting oppression with argument alone.

Shot on the fly, with the cast and crew unnamed to avoid reprisals, “Manuscripts Don’t Burn” (the title is a quotation from a novel by the Russian writer Mikhail Bulgakov) unfolds in appropriately wintry light. Its violence is low-tech — a clothespin and a suppository feature prominently — and its look is old-school, but its message could not possibly be more momentous.