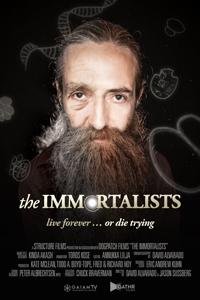 Two scientists convinced that aging and death is optional race to prove that the only real inevitability is income tax in The Immortalists, David Alvarado and Jason Sussberg's look at a controversial fringe of scientific research. Subjects Bill Andrews and Aubrey de Grey are colorful in quite different but complementary ways, giving the thought-provoking topic enough screen appeal to draw audiences beyond the fest circuit.

Andrews, an avid runner with a fund-raiser's deep reserve of enthusiasm, speaks with confidence about what life will be like on the day he turns a million years old; de Grey, a Rasputin-like Brit with a more theoretical bent, is less motivated by the desire to extend his own life than by the intellectual challenge — even if, as each man's story develops, the idea of living forever colors his personal life as much as it does Andrews's.

The filmmakers nod to some successful experiments involving mice that suggest these scientists aren't necessarily mad, then offer just barely enough explanation of each man's research — involving the pieces of chromosomes called telomeres and the array of molecular garbage that accumulates over time in our cells — to give an idea how their approaches differ. Motion graphics, stylish throughout the doc, are especially helpful here.

We meet Leonard Hayflick, a scientist who pioneered aging studies decades ago and isn't shy about criticizing approaches he thinks will go nowhere. But the film understandably is more focused on the personal and professional travails of its two heroes, who confront mortality in themselves, their loved ones, and their business ventures.

While Andrews demonstrates a brand of self-assuredness some may see as naive, he comes to seem like a voice of sanity when compared to de Gray, whose public debates on the ethics of "curing" aging suffer from some dubious logic, and whose increasing hedonism (after moving to California, he founds an "immortality and polyamorous haven" in the woods) makes him look like a cult leader in the making. Even if it doesn't convince us they're likely to conquer death before it comes for them, the film does prompt interesting debates about just how desirable an unlimited stay on Planet Earth would be.