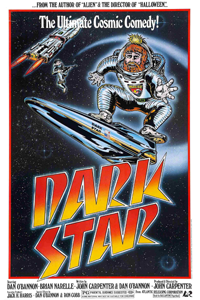 Carpenter's fondly remembered first feature, which the director himself described as 'One big optical - Waiting for Godot in space'. Four bombed-out astronauts journey endlessly through the galaxy, whiling away the time with jokes, sunlamp treatment, personal diaries on videotape, and games with their own pet alien. Arguably the last great hippy movie with its jokey references to drugs, the Absurd and California surfing (one crew member makes it back to earth on an improvised board), it also anticipates the sci-fi vogue of the '70s (Alien and Carpenter's own gem The Fog) as well as taking a healthy sideswipe at the pretensions of 2001. Sheer delight. — Time Out London