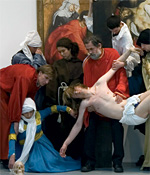 A young poet, whose violent father's shadow looms over him, recalls traumatic episodes from his life while locked away in an asylum. Majewski's newest work is composed of thirty-three video art pieces which may be exhibited on multiple screens in a gallery context, but are here assembled by Majewski as a narrative feature.