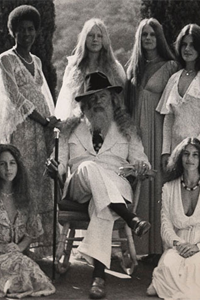 The Source, an extraordinary new documentary feature about the “Source Family,” a little-known hippie counterculture enclave living in Los Angeles in the 1970s, premiered at the SXSW Film festival this year. Co-directed by Jodi Wille and Maria Demopoulos, The Source intimately examines the lives of a group of spiritual seekers who came to follow a charismatic but deeply flawed polygamous guru who opened one of the very first vegetarian restaurants in America. The Source restaurant was a Sunset Strip landmark for over two decades, attracting clientele like Warren Beatty, Julie Christie, Willam Morris super agents and various other Tinseltown notables with its healthy food and good-looking staff.

Who were the Source Family?

Jodi: They were a utopian group of 140 beautiful young people who, for a time in the 70s, lived together in a mansion in the Hollywood Hills and explored the cosmos with a man named Father Yod, a controversial restaurateur turned spiritual leader. They had a popular vegetarian restaurant on the Sunset strip that movie stars and musicians frequented and they had their own rock band.

What was it about Father Yod that was so special that he could attract followers so easily?

Jodi: He was a wizard, a war hero, an outlaw, a conceptual genius, a father figure and a friend. He was fearless and he had a sense of humor. He showed those who were seeking how to make magic real in their own lives. And the ladies loved him.

Didn’t Woody Allen use the commune’s health food restaurant as the backdrop for some anti-Los Angeles sentiment in Annie Hall?

Maria: Indeed he did. It’s an iconic scene because it defines the great polarity at the time between the two coasts. The Source was an epicenter and represented the West Coast’s fixation on health and mysticism, which his character, “Alvy Singer,” a cynical New Yorker, perceived as self-indulgent and superficial.

How did you come to make a film about The Source?

Jodi: While I was helping to put together the book about the group (The Source, Process Media 2007) with Isis and Electricity Aquarian, Isis suggested we shoot our interviews with family members on video. Once Isis’ showed me her mind-blowing Source archives with the Super 8 home movies, color slides, scrapbooks, and hundreds of hours of audio recordings, I knew we had to make a film. I then brought in Maria, a talented and experienced commercial director and a longtime friend, to help bring things to the next level. The universe unfolded from there.

Are the Source Family still together, in some form, in 2012?

Maria: They’re no longer an active family— they dispersed in 1977 after Yod’s death. But the internet has reconnected many of them and they also have occasional Source Family reunions. The band reunited in 2007 when the book came out, and since then they’ve toured nationally and released new three albums. While the Source Family members all have their own lives now, it’s clear when you talk to them that most still have one foot in Yod-land.