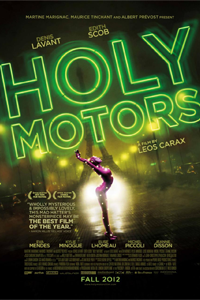 As I watched it, and for an hour after it ended, I was moved by Holy Motors. A few days later, it hasn't stuck with me. It's like a dream remembered more for its immediate effect than for the details that piqued your emotion.

Given the surreal quality of the film, that may be exactly what director Leos Carax was going for.

He Struts and Frets His Hour upon the Stage

Oscar (Denis Lavant) is an actor who spends his entire day in a limousine riding around Paris with Céline (Edith Scob), his driver. See also Cosmopolis.

He's been hired to interact with certain people, not on stage, and not in front of any cameras (no visible ones, at least), but apparently in real life. See also Alps.

After a surreal movie-theater introduction, he starts his day as a banker. Later, he uses a motion-capture suit to act out some video-game and "adult entertainment" scenes. He wears Leprechaun makeup and disrupts a photo shoot, carrying off the model into a cave. He plays the father of a teenaged daughter, then the killer of a Chinese importer.

What his job really is, or whether he lives in the same world as you and I, we never entirely know. Some of his jobs are plausible (such as dressing up as an old beggar woman). Others are not literally possible -- such as when he kills another version of himself.

The only time he gets to go out without makeup is a rollicking musical interlude, marching around a church, smack in the middle of the film.

Holy Motors demands that you bring yourself to it and decide on your own interpretation. Is it a metaphor? Is it a dream? Is it science fiction? Does "Holy" refer to God or simply the supernatural? If the former, then which aspect of God? The moral arbiter? The animating spirit? The puppeteer of Fate?

It's easy to ask the questions, but a critic should offer some perspective, I think.

I haven't settled on a single interpretation. A superficial thought is that actors like Oscar must live very well-rounded lives. One day you're shooting assault rifles and turning somersaults in front of a blue screen, the next you're playing a harried father, and after that you're speaking Chinese. For a hobby you play accordion, in case you're ever asked.

Along the same lines, Oscar's appointments represent many distinct phases in a lifetime: parenthood, teenaged anger and lust, childish lack of self-control, careerism. Even the stranger ones suggest death and reincarnation. Maybe the "Holy" implies a hand of Fate guiding us all through our nonsensical phases of life.

Carax thows in some sparkles that seem like "clues:" 1890s film clips of a nude male model; a repeated phrase, "invisible machines," once referring to cameras that Oscar used to be able to see; and, of course, everything else that doesn't make literal sense.

But I don't claim to have cracked the code -- nor do I think audiences can or should. This is art, not a puzzle.

David Lynch's films have mystified me, similar to Holy Motors, but they rarely stir my emotions. I haven't mentioned Oscar's last appointment because it sounds so absurd. Yet it's also the most devastating, deflating moment of the film. Our usual reaction to surprise is laughter. But in the case of Oscars last job, because of the music, the lead-up, and because of Lavant's performance... waiting on the porch as long as possible, drawing one last slow drag on his cigarette before getting into character -- what should come as an involuntary laugh hits you like the news of someone's death.

Although I can't pin down Holy Motors, it is one of the most rewarding films I've seen in a very crowded fall. It is a work of cinematic art that demands your engagement.

I'm sure you know not to buy a ticket if you're looking for escapist storytelling. But if you've made it this far and you're still with me, then see Holy Motors with a friend who likes to talk about movies.