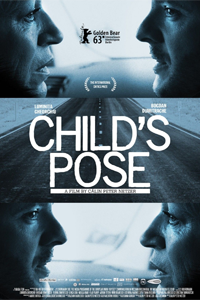 A taut modern morality tale from Romania with a knock-out lead performance from Luminita Gheorghiu.

Golden Bear winner at the 2013 Berlin International Film Festival, Child's Pose is the third film by writer/director Calin Peter Netzer which sits firmly next to the a detailed, ambiguous and politically-hued work of countrymen like Cristi Puiu and Cristian Mungiu in offering a withering admonishment of life in contemporary Romania (but also, by extension, the world at large).

The film plays like a modern update of Mildred Pierce in which a bullish matriarch is unable to suppress her innate instinct for self preservation and never-say-die keeper of family cohesion. Only here, her impulses are not driven by an indelible sense of love and companionship, but through a canny ability to be able to exploit 'the system' through her status, semantics, political connections and a near total dearth of human empathy.

Luminiţa Gheorghiu redefines the notion of 'blonde bombshell' as Cornelia, a diminutive architect of some repute who somehow manages to conduct her affairs with an emotional gear-stick which is stuck firmly in neutral. Her son, Barbu (Bogdan Dumitrache), is a depressive layabout in a failing marriage and a potential blight on her militantly careerist outlook, but someone who she must protect at all costs. Robotically pragmatic, Cornelia only manages to express love through hard actions and words, and it's easy to see why her son might have been driven to a state of near-madness.

Yet her son is at fault too, as he has killed a child in his car and could have potentially been speeding. Cornelia doesn't see the death of the child as an issue – this is merely an unfortunate thing that has happened which she must deal with quickly and brutally. She is more worried about how she's going to rescue her son from this jam by any means necessary. He refuses to apologise — possibly an admission of guilt? – but she doesn't care. Losing is not an option.

Child's Pose is a drama built on top of a clever contradiction: Cornelia is clearly some kind of monster — a female Gordon Gekko or T-1000 if you will — for whom human tragedy requires swiftly administered tactical manoeuvres, not contemplation or sorrow. Yet, all of this is done at the service of her son, her family, her reputation and her livelihood. In some kind of cold, unvarnished reading of the situation, she somehow believes that it's love (for her son) and not malice (for his victims) that is driving her actions.

Netzer's film is about moral decline, but it's also about the survival instincts of the economic elites, always ready to channel their vast resources in order to overwhelm those underclass interlopers who might think of battering down the walls their paradise. The intense final scenes of the film cement the fact that, despite his obvious mania, it's not Barbu who needs saving from himself, it's Cornelia.