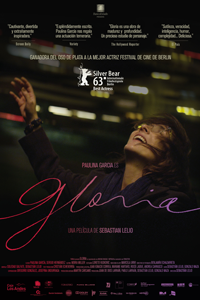 Chilean actress Paulina García won the 2013 Silver Bear for Best Actress at the Berlin Film Festival. The prize is well earned. Her performance in Gloria as the title character gives weight and meaning to a romance that could otherwise have seemed insubstantial.

Divorced, but not through with love, Gloria (García) is introduced to the audience at a bar, listening to early '80s pop music, hoping for the chance to dance. Over the next few scenes, the film shows us her loneliness: she calls her children from work, she attends a yoga class with her daughter, she chats with an old caretaker and deals with the stray hairless cat that occasionally wanders in to her apartment.

Directed by Sebastián Lelio, and written by Lelio and Gonzalo Maza, Gloria has a lot of these illustrative scenes. They show the characters' mood and emotions, without necessarily driving a an event-based plot.

Gloria meets Rodolfo (Sergio Hernández), a soft and gentle man, fifteen years her senior. Their romance is played like any other romance you'd see in the movies, no matter that the subjects are facing grandchildren and glaucoma. There are stolen glances, shy smiles, and plenty of dancing. As they get more serious, the romantic scenes keep pace. Rodolfo isn't exactly a hunk, but Gloria's hormones still work. Gloria gets hot, and García can still sell it.

Gloria is episodic; disjointed scenes are spliced together. Usually that's a style I don't like, because it often means the movie is trying to do too much, and story continuity often suffers. But here the emotional arc is the story. It doesn't matter that there are jumps in time and space, because there is emotional continuity in Gloria and Rodolfo's relationship.

Gloria is surprised to learn that Rodolfo operates an adventure playground, with zip lines, cable swings, and paintball battlefields. He also has adult children -- daughters in their late 20s and early 30s who still live at home. Maybe that's understandable with the global economy in recession. What's odd is that he doesn't want Gloria to meet his daughters; he's not ready for it yet. Is it a mere quirk? Or is it the beginning of a crack in the budding relationship?

One of the film's best scenes is a dinner party with Gloria's children, their significant others, her ex-husband, and Rodolfo. Her family is lively, grounded, and well adjusted. Lelio gives a minute of screen time to the family singing an amateur version of Jobim's Waters of March that is beautiful in its imperfection. Rodolfo is delighted, but a little overwhelmed. He clearly comes from a more reserved, conservative family background than this. Some wine is consumed and Gloria and her ex spar in a way that makes Rodolfo even more uncomfortable, and he leaves without saying goodbye. It's understandable, but it makes Gloria angry.

García's performance is very good, and it only gets better as the film progresses. Maybe the screenplay has one too many contrivances -- the romance is on-again, off-again -- but when the conflict grows, that's when García's performance really shines. Not in an over-the-top explosive way, but simply in our estimation of her character.

Gloria might be a hard sell for film festivals and audiences, since fifty-year-old lovers don't exactly sound like a formula for success. But García's award-winning performance and the well-sculpted screenplay work together to make a surprisingly compelling love story.