A family-friendly selection of shorts 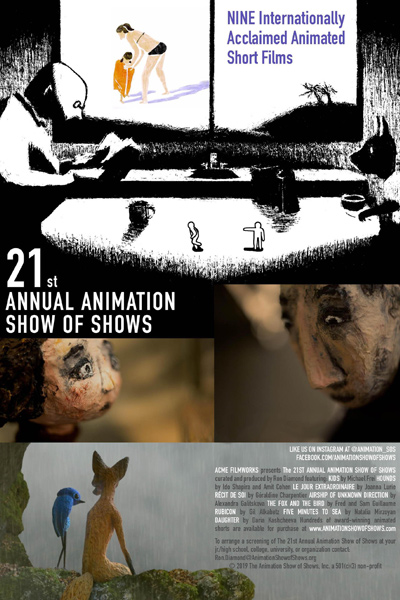 The ANIMATION SHOW OF SHOWS, a curated selection of the “best of the best” animated short films created by students and professionals around the world, returns to theaters across North America this fall. Featuring 10 films from seven countries, the 2019 edition of the program offers an array of highly imaginative, thought-provoking, and moving works that reflect the filmmakers’ unique perspectives and their relationship to the world.

“Animation is an incredibly versatile medium that allows artists to explore situations and ideas that you won’t see anywhere else,” says ANIMATION SHOW OF SHOWS founder and curator Ron Diamond. “From political and philosophical concerns, to the complexities of individual identity and personal relationships, animated short films are uniquely able to capture the many facets of human experience.”

Personal relationships are at the heart of several of the films in this year’s program, including Daria Kashcheeva’s International Student Academy Award-winning puppet animation Daughter, a deeply moving exploration of the ties between a father and daughter. Charting a very different, but related, course, “The Fox and the Bird” by Sam & Fred Guillaume, is a beautifully observed fable about an unlikely friendship between the two eponymous characters. Filmmaker Michael Frei and game designer Mario von Rickenbach provide a more clinical view of human behavior in their mesmerizing KIDS, which explores the nature of group dynamics.

The question of individual identity informs both Hounds by Amit Cohen & Ido Shapira and (Self-Narrative) by Géraldine Charpentier. In the former, a highly domesticated dog undergoes a disturbing change when a pack of wild hounds gathers near his house, while the latter offers a clear-eyed and heartfelt look at a young girl’s journey to self-realization as a transgender person.

Animation has often been the medium of choice for artists seeking to explore abstract ideas or philosophical issues, and these themes are well represented in the program. Joanna Lurie’s mysterious and transcendent Flowing through Wonder chronicles an extraordinary ritual and celebrates the transformative mystery that underlies life and death. Natalia Mirzoyan’s Five Minutes to Sea in which a young girl waits impatiently to go back in the sea, takes a more lighthearted approach, while playing with conundrums of time and perspective.

The program is rounded out by Gil Alkabetz’s Rubicon, a frenetic and very funny hand-drawn animation based on the classic riddle about how to ferry a wolf, a sheep, and a cabbage across a river without something getting eaten. In addition to the slapstick, the film also serves as a parable about the convoluted nature of political negotiations, specifically those related to the Middle East.

THE 21ST ANNUAL ANIMATION SHOW OF SHOWS has a running time of 83 1/2 minutes and includes 10 films, three of which have qualified for Academy Award® consideration†. The complete lineup is:

Curator Ron Diamond responding to parental questions of age appropriateness explains: In my opinion, this program is very kid friendly as it's a bit tough and uncomfortable at times but it's also life affirming, funny, inspiring, purposeful and memorable. There is no sex or profanity. Spread throughout the program and like "life" in general, there are isolated incidents of interpersonal tension, hitting, shoving, sadness, anger, growling, barking, subjugation and retaliation. A burial at sea depiction, a transgender identity film, spoken French and Russian with subtitles, and of course, a wolf inexplicably and briefly has an oar stuck in its hindquarters.

For 21 years, the ANIMATION SHOW OF SHOWS has been presenting a highly selective, “best of the best” program of new and innovative short films to appreciative audiences at animation studios, schools and, since 2015, theaters around the world. During its first 20 years, 40 of the films showcased in the ANIMATION SHOW OF SHOWS went on to receive Academy Award® nominations, with 11 films winning the Oscar®. The ANIMATION SHOW OF SHOWS is a 501(c)(3) not for profit and is supported by major studios, companies, schools and hundreds of animation lovers around the world. Learn more about the films in current and past Animation Show of Shows and their makers by joining our mailing list at www.animationshowofshows.com/pages/sign-up.